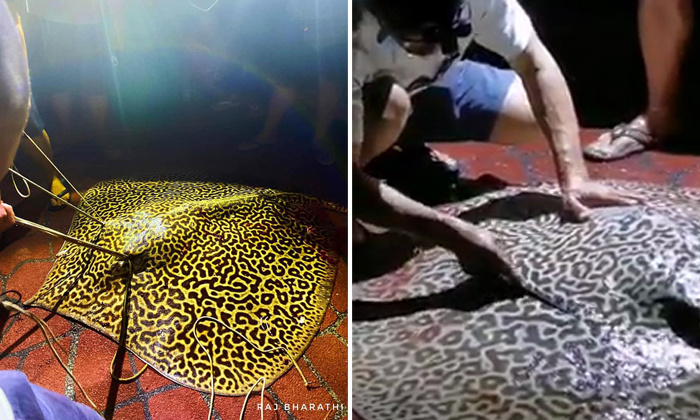 The National Parks Board (NParks) has responded to allegations of animal cruelty involving a gigantic stingray that was caught and reeled in at Bedok Jetty on July 30.

An angler had earlier recounted how he "landed" the 80kg leopard whipray after "three hours of hard work" and shared photos of him posing with his big catch.

He wrote on his blog: "We had to cut up the fish and weigh it part by part to get the actual weight of the fish. Final weight add up to 80kg. The fish was shared among many friends."

Reactions online have been mixed. Some netizens and fellow enthusiasts were awed by the unusual catch, while others felt that the whipray had been subjected to unnecessary suffering.

Facebook user Samantha Lee shared photos showing the bloodied whipray, as well as videos of the creature being sliced open and its flesh cut out.

In her post, Lee slammed the angler for using "various tools" to "poke, stab, hook, [and] string" the whipray up onto the jetty for pictures and then killing the animal, instead of releasing it back into the water.

She also noted that the leopard whipray is classified as a vulnerable and threatened species under the International Union for Conservation of Nature.

The Animal Concerns Research and Education Society (Acres) shared similar sentiments in a statement to Stomp and called for animals to be treated with compassion.

NParks has also responded to Stomp's queries regarding the matter.

"These areas are managed as sanctuaries for the mangrove and marine habitats to flourish and the fish population to grow to maturity."

NParks also works with other agencies to carry out joint enforcement operations in nature reserves and reservoirs.

On top of working with other agencies to educate the fishing community to fish only at designated sites, NParks is also working closely with fishing communities to promote responsible fishing.

Dr Tun shared: "For example, we engaged with the Friends of the Marine Park to establish the “no-catch zone” in Sisters’ Islands Marine Park.

"In the course of the engagement, the fishing community came to an agreement that fishing should not be allowed at the Marine Park to safeguard its marine biodiversity.

"Through our Friends of Marine Park Community, NParks has also engaged anglers through the Marine Stewards Singapore to come up with some best practices for recreational fishing.

"This includes practising voluntary catch-and-release fishing, where fish are released back into the sea if not to be eaten.

"This is especially for juveniles, and endangered and threatened species."

She said: "This allows the fisherman some control to target specific groups of fishes and is less destructive compared to traps and nets."