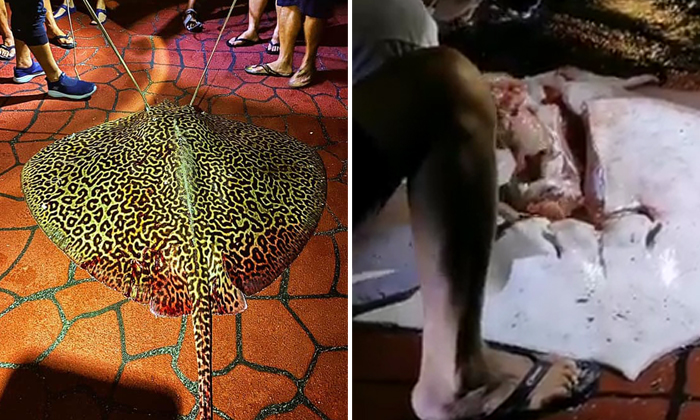 80kg stingray "cut up" at Bedok Jetty: NParks engaging anglers to come up with best practices for recreational fishing

A gigantic stingray being reeled in at Bedok Jetty might sound like an amazing feat to some enthusiasts, but the reality is a lot less magnificent.

The unusual catch on the evening of July 30 made headlines after photos of men posing with the 80kg leopard whipray were posted online.

An angler, known as Alo, recounted how he "landed" the creature on his Shoreangler blog and said it took over three hours of "hard work".

Alo said he and several friends had to bring the whipray to shore using four fishing gaffs.

He added: "We had to cut up the fish and weigh it part by part to get the actual weight of the fish. Final weight add up to 80kg. The fish was shared among many friends."

On July 31, Facebook user Samantha Lee shared photos showing the bloodied leopard whipray. There were also videos of the creature being sliced open and its flesh being cut out.

In her post, Lee slammed the anglers for subjecting the whipray to unnecessary suffering and killing it, instead of releasing it back into the water.

"Instead of taking a picture when he first reeled it in, unhooking and letting the Ray swim free, he had to bring the Ray up onto the jetty to take this picture," said Lee in reference to the photo of Alo posing with the animal.

"Keeping in mind that this is a 80kg to 100kg Ray and slimy, it's not going to be an easy task. There was no way they could have brought this Ray up onto the jetty without a net.

"So, Alo and the people around him had to USE VARIOUS TOOLS to POKE, STAB, HOOK, STRING the Ray up onto the jetty.

"And because of this action, the Ray probably bled out on the jetty AND DIED. YES THE RAY DIED. BUT THAT'S NOT ALL, the Ray was then cut up and shared among the people there.

"My heart bleeds for this poor Ray who had suffered so much before it died."

Lee noted that the leopard whipray is classified as a vulnerable and threatened species under the International Union for Conservation of Nature.

Lee clarified that she was not against fishing, adding: "But if you catch something rare and humungous and you have no means of humanely taking a picture and releasing it, then DON'T DO IT JUST FOR VANITY OR BRAGGING SAKE.

"You don't need to have a sexy photo of yourself beside a nicely placed animal to leave behind a legacy."

Mr Kalai Vanan, deputy chief executive officer of the Animal Concerns Research and Education Society (Acres), has also weighed in on the incident.

He told Stomp in response to queries: "We feel frustrated and sad that the leopard whipray, a vulnerable species according to CITES (the Convention on International Trade in Endangered Species of Wild Fauna and Flora) was killed instead of being freed.

"This species, like countless other aquatic animals regardless of their population status have seen substantial decline in populations due to overfishing.

"It is sad that the animal had to be killed even though food security in Singapore is secure.

"While Acres as an animal welfare group recognises fish as sentient beings too, this issue can be better managed by more awareness raising among the angling community on what they can take and what they should release back."

Mr Kalai suggested putting up signs at popular fishing spots on possible endangered species that one might encounter so as to help anglers "make better informed decisions".

He added: "We may be lacking in clear blue waters but let us remember that the waters around our tiny island are home to some amazing biodiversity including species of sharks, dolphins, stingrays and sea turtles.

"We should be working towards preserving them and treating animals with compassion."