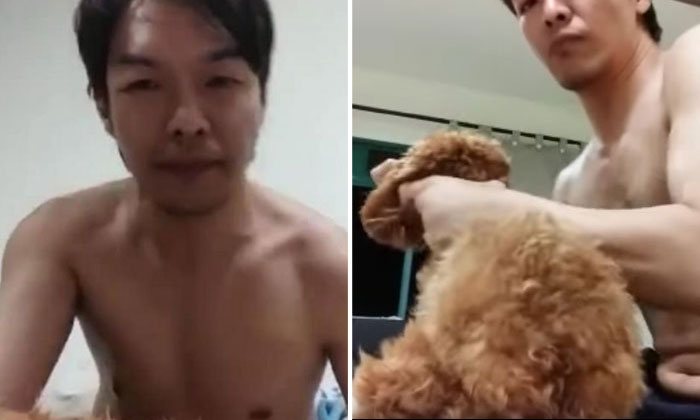 A man seen in viral videos repeatedly punching his pet poodle, swinging it from its hind legs and blasting the wet dog with a standing fan was sentenced to eight months' jail on Thursday (Oct 7).

Clement Chia Tian Xiang, 42, was also disqualified from owning an animal for a year.

The Singaporean had pleaded guilty last month to four charges under the Animals and Birds Act of cruelly torturing an animal.

Another two charges – failing to ensure his dog was protected from injury or disease and not having a licence to keep it – were taken into consideration for sentencing.

Noting that Chia had derived sadistic pleasure from tormenting the dog, District Judge Lorraine Ho said: “The acts of cruelty committed by the accused were inhumane and vicious. (He) had a look of happiness when he saw his dog in pain.

“Had there been a victim impact statement (from the dog’s current owner), I might even be minded to impose a higher sentence.”

Chia's offences took place some time between October 2016 and November 2017 in his Farrer Park Road flat.

Video clips of the abuse taken by Chia and his cousin Chia Yong-Quan went viral online more than three years later, leading to their arrest.

In July this year, his cousin was fined $4,500 and disqualified from owning an animal for a year for not stopping the abuse.

Six video clips of the abusive acts - ranging in duration from 16 seconds to over a minute - were shown in court on Sept 8.

In one video, Chia is seen using a plastic hanger to beat the poodle multiple times and suspending it in mid-air from its legs. The poodle can be heard whimpering even though its mouth is tied up.

Another video shows Chia smirking at the camera while pulling the poodle by its ears and repeatedly punching its face.

The longest video of a minute and 16 seconds shows the poodle - wet and with its front legs bound - shivering as a fan is blown directly at it.

At one point, its hind legs buckle and it struggles to stand. Chia threatens the poodle, saying "One more time down... I slap you" before zooming in on the tears in his pet's eyes.

Weak from the torture, the dog collapses. Chia threatens to punch it and pulls its neck to force it to stand upright again.

His offences came to light in July last year when the clips surfaced online and went viral. Several members of the public were alarmed and alerted the authorities about the abuse.

In a statement to NParks, Chia claimed he was merely disciplining his pet.

"Such a claim must be rejected. The acts exceed any acceptable act of discipline," said Deputy Public Prosecutor Norine Tan in court earlier.

The court heard that the poodle has since been adopted by Chia's former girlfriend some time in 2017 and is doing well.

DPP Tan, who called for Chia to be jailed for between eight and 12 months, likened the poodle to an infant and said it was unable to protect itself or report the abuse it suffered.

"Such offences are difficult to detect and this acutely requires stiffer penalties for the purposes of deterrence," she said.

DPP Tan added that Chia's guilty plea carries limited weight as the video clips are "incontrovertible evidence" that captured every detail of his offences.

In mitigation, Chia's lawyer, Mr Foo Ho Chew, said his father had died around the time of his offences and had affected his judgment.

For cruelly torturing an animal, Chia could have been jailed for up to 18 months and fined up to $15,000.