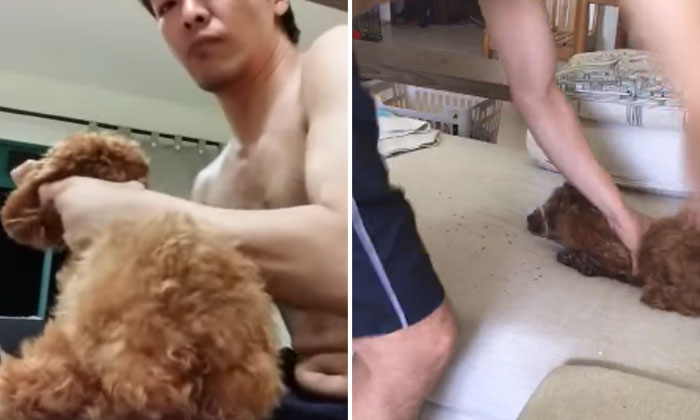 The Society for the Prevention of Cruelty to Animals (SPCA) said that the authorities have visited a suspected animal abuser's home after they were alerted to videos showing the man repeatedly punching a poodle.

The man was seen hitting the dog in a few videos where the poodle had its muzzle and limbs tied up.

Due to the distressing nature of the videos, Stomp will not be publishing them.

The SPCA had earlier posted an appeal for information on the man in a Facebook post on Saturday (July 18).

In an update on Sunday (July 19), it said NPark's Animal and Veterinary Service (AVS) said the dog is in good physical condition and is well taken care of by its current owner.

In response to a Stomp query, SPCA's executive director Dr Jaipal Singh Gill said: "The SPCA were alerted to this case early on Saturday morning.

"The videos that were posted online depicted appalling animal cruelty.

"Fearing for the animal’s life and safety, we put out an urgent appeal for information on social media and very quickly received details on the suspect.

"The authorities were quick to respond and visited the home of the suspect that morning.

"We would like to thank them for their prompt attention to the case.

"We also thank the public for their assistance.

"The unanimous and strong condemnation of the cruelty we all witnessed that day has sent a very strong signal to would be animal abusers.

"There is no excuse for such abuse and perpetrators of such crimes should be punished to the fullest extent of the law and barred from keeping pets."