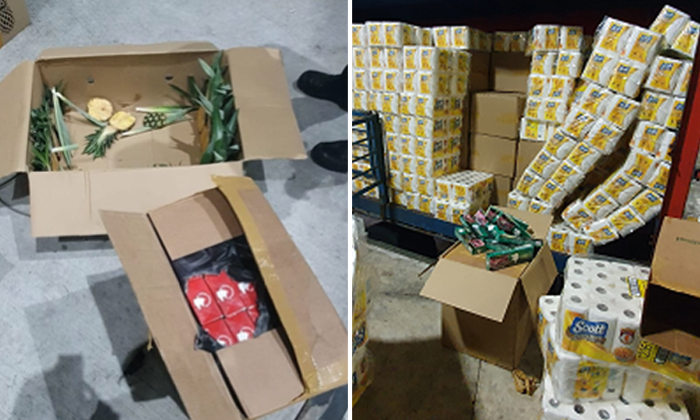 Two cases of duty-unpaid cigarettes concealed in Malaysia-registered lorries were uncovered by the Immigration & Checkpoints Authority (ICA) at Tuas Checkpoint on Monday (Sep 28).

A total of 7,559 cartons of duty-unpaid cigarettes hidden within cargo consignments was uncovered, said the ICA said in a statement.

The first case was detected at around 4am when ICA officers noticed anomalies in the scanned images of a lorry.

Upon further checks, 5,059 cartons of duty-unpaid cigarettes were found hidden in a consignment of tissue rolls.

About 10 minutes later, another Malaysia-registered lorry was directed by ICA officers for further checks.

This time, 2,500 cartons of duty-unpaid cigarettes were found hidden in boxes containing pineapples.

Three Malaysian men, aged 22, 25 and 41 years old, have been handed over to the Singapore Customs for further investigations.

"The same methods of concealment may be used by terrorists to smuggle arms and explosives to carry out attacks in Singapore," it added.

"ICA will continue to conduct security checks on people, goods and conveyances at the checkpoints to prevent attempts to smuggle undesirable persons, drugs, weapons, explosives and other contrabands across our borders."