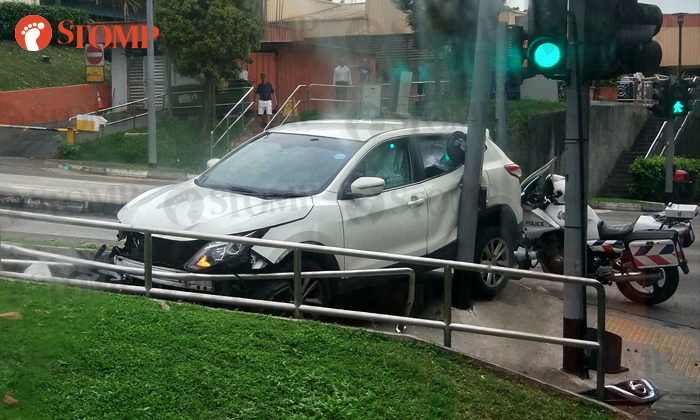 A 70-year-old pedestrian was injured after being hit by a car along Seah Im Road on Tuesday morning (July 3).

Stomper Sharad, who had been passing by on a bus, contributed photos that showed how the car had crashed into a railing, leaving its front bumper damaged.

There was also a dent on the vehicle's left side from when it hit a traffic light post.

Sharad told Stomp: "The Singapore Civil Defence Force (SCDF) was on the scene attending to an injured old man."

Stomp understands that the car driver had lost control of the vehicle and crashed into a carpark gantry. The car then hit the elderly man, before colliding into the railing.

In response to a Stomp query, the police said they were alerted to the accident involving a car and a pedestrian at 10.07am.

"The pedestrian, a 70-year-old man, was conscious when conveyed to Singapore General Hospital (SGH)," said a police spokesman.

SCDF, who responded to the accident at 10.08am, told Stomp it conveyed two men to SGH.

The hospital was alerted to be on standby to receive the older man.

Stomp understands that the second man, who is in his 50s, was not involved in the accident itself, but had been at the scene.

Related Stories
3 men injured after taxi mounts kerb and crashes into pillar in Geylang
65-year-old woman unconscious after being hit by lorry in Commonwealth
Woman, 49, left bleeding on road after getting hit by bus at CCK
More About:
pedestrian
injured
accident
car