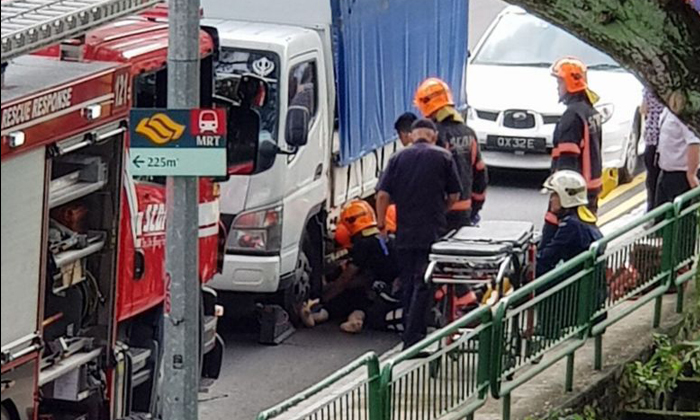 A 65-year-old female pedestrian was hit by a lorry in Commonwealth on Monday afternoon (Jan 8) and was unconscious when sent to the National University Hospital (NUH).

In response to media queries by Stomp, the police said they were alerted to the accident, which occurred in the direction of Queensway, at 3.19pm.

The victim, identified as Ms Yin Ailai by Shin Min Daily News, sustained serious injuries and was manually extricated from under the lorry.

Her 38-year-old son, Mr Wu Qingming, told Shin Min reporters that he was at work when he received a call informing him about the accident. An eyewitness had used his mother's phone to contact him.

Ms Yin, who suffered abrasions on her arm and bruises on her head, is still in a coma.

According to Mr Wu, his mother's condition "does not look good".

Ms Yin, described to be usually careful when crossing the road, had been on her way to a gym near Commonwealth Drive when the accident took place.

The lorry driver said the accident "happened too quickly" and he could not stop in time, reported Shin Min Daily News.

Stomp understands that the victim remains unconscious as of today (Jan 10).