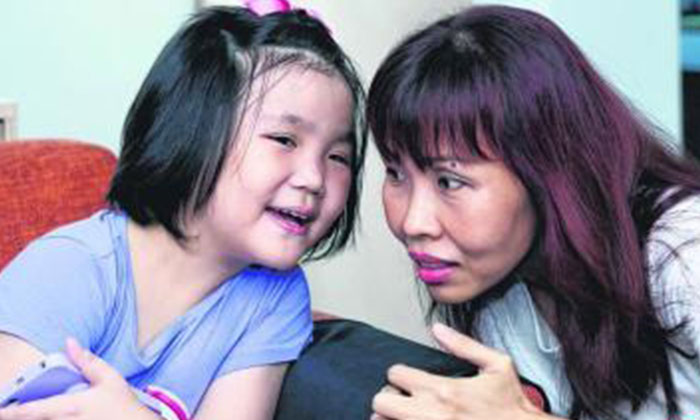 A 7-year-old girl had to undergo gruelling chemotherapy sessions as well as an operation to remove her right ovary and fallopian tube after she was suddenly diagnosed with ovarian cancer.

The mother of the child, Ms Chen Beiyun, told Lianhe Wanbao that on a Sunday evening last year, the family of four — Ms Chen herself, her husband, their 13-year-old son and 7-year-old daughter — were out for dinner when their daughter suddenly experienced severe pain just below her right abdomen.

The girl, Xie Ruien, was in so much pain that she could not move, and the rest of the family quickly brought her to an accident and emergency (A&E) department for treatment.

In March 2017, Ruien was diagnosed with Stage 2 ovarian cancer.

“I was shocked. Why would such a young child get this kind of cancer?”

Ms Chen said that Ruien had no idea about her condition and was unaware that she had to undergo surgery and chemotherapy.

“I was more afraid of her having to go through chemotherapy than she was.”

The doctors removed Ruien’s cancerous ovary and fallopian tube, and she had to start her chemotherapy sessions which lasted four months.

Ms Chen said that throughout the period, the optimistic Ruien was never afraid:

“When she first started on her chemotherapy, she looked forward to each session because there were many toys at the hospital and she was very happy at the thought of getting to play with them.”

For Ms Chen, her heart ached for her daughter each time she had to go for chemotherapy.​ The injections may have been done on Ruien, but it was Ms Chen that was in agony.

Fortunately, Ruien managed to complete her sessions and is gradually recovering. However, she still needs to go for regular medical check-ups.

“Because Ruien’s condition is very rare, the doctors said that they will continue to monitor her until she reaches adolescence. The doctors told us that in normal circumstances, a patient will still have her periods and can conceive after receiving treatment.”

Related Stories
Relatives worry for siblings whose parents died in Johor car crash: "I don't think they understand"
Sister of Naval Base Sec student killed in JB car crash: 'I woke up waiting for you to ask me to order McDonalds'
Man killed over affair with woman, facial bones fractured: Mastermind hubby "deserves to die", say victim's parents
More About:
cancer
tragic
touching