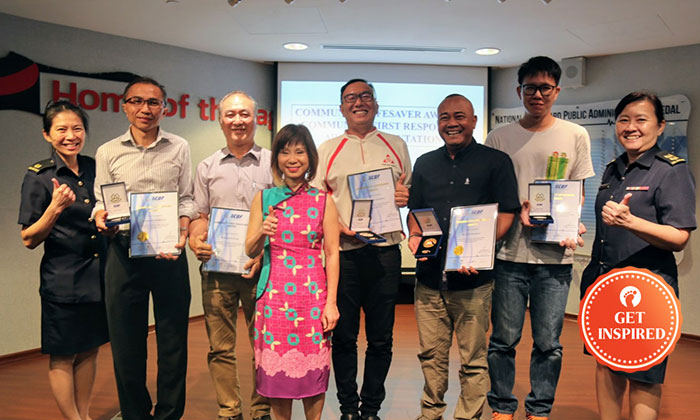 Dr Amy Khor, Senior Minister of State for the Environment and Water Resources and Member of Parliament for Hong Kah North Constituency, presented the Community Lifesaver and Community First Responder Awards to Mr Billy Lim and five other individuals on Friday afternoon.

The ceremony took place at the headquarters of the 4th SCDF Division in Bukit Batok.

Mr Lim, a first-aid instructor had been walking home at about 10pm on Nov 21, 2016, when he received an alert from Singapore Civil Defence Force's myResponder app, informing him that there has been a case of a cardiac arrest nearby.

The 32-year-old man immediately ran over to the Hong Kah North Community Centre at Bukit Batok to render assistance.

When he arrived, he spotted five others already at the scene.

Some were already doing CPR (cardiopulmonary resuscitation) on a man, and an AED (automated external defibrillator) had been attached to him.

Mr Lim took over the performing of CPR after one of them became tired.

"Performing CPR is tiring... you have to let them rest in between and someone else takes over."

The group used the AED to deliver three shocks to the man, believed to be in his 50s while waiting for the ambulance to arrive.

The man was later taken to Ng Teng Fong General Hospital and survived.

Asked why he decided to help, Mr Lim said:

"I always imagine that it's my loved one that is the one in trouble. And you would do your best to help a loved one.

"Nothing can be more fulfilling and meaningful than saving a life."

Another one of the awardees, Mr Danny Ng, 42, chairs the Hong Kah North Community Emergency and Engagement Committee.

Mr Ng, a director of a recycling company, was alerted to the incident after a grassroots meeting that night.

He and three others performed CPR on the man when they realised that he was not breathing.

"We weren't scared, we just wanted to save a life. We must have spent about 10 to 15 minutes performing CPR, but it felt a lot longer."

The man started vomiting after the group administered three shocks to him.

"We suddenly heard the sound of him gasping for air and we hugged each other."

A SCDF spokesman said that the group's quick thinking and timely intervention saved a life.

"We need more #CommunityFirstResponders like them to bring us closer to being #ANationofLifesavers!"

Related Stories
American writes heartwarming post on Singapore's masterclass in racial and religious harmony on CNY
Kudos to bus captain on service 93 for remaining calm and helping passenger who fainted
Passenger touched by cabby's kindness 'in a materialistic world' after daughter throws up
More About:
inspiring