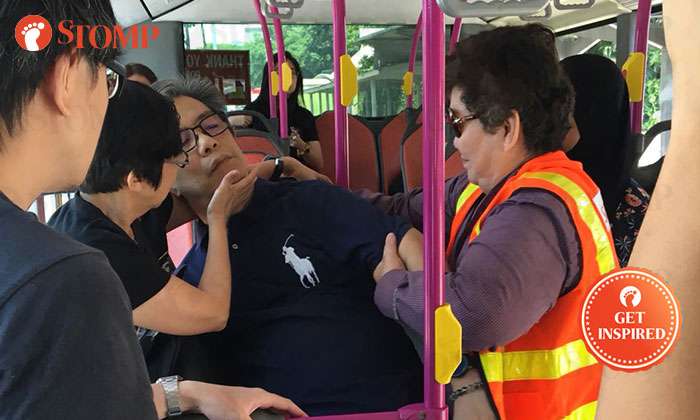 A helpful bus captain helped resuscitated a man who had fainted.

Stomper Thomas was on board the bus heading towards town when a passenger in front fainted.

The passenger’s wife who was seated beside him started to panic.

“His wife started was shocked and kept slapping her husband’s face to wake him up.

“She did not know what to do to revive her motionless husband.”

Thomas who was seated behind the couple ran to the front and sought help from the bus captain.

The bus captain promptly stopped the vehicle at the next bus stop and got out to attend to the man.

“The bus captain went up to the man and immediately started resuscitating the man. She tried to apply pressure to the acupuncture points, and applied intermittent slaps to his back.”

The bus captain’s attempt worked, and within a few minutes, the man started becoming responsive again.

Thomas then called for an ambulance.

During the process, the bus captain carried the man to the front of the bus where there were fewer people.

She allowed the man to recuperate while she directed the other passengers to disembark and switch to another bus.

The ambulance arrived within minutes, and emergency personnel attended to the man.

“I think the bus company should award something to the captain for her heroic act. While facing an emergency, she secured the bus, managed the passengers and kept everything under control single-handedly.”

Related Stories
SCDF volunteer on helping ITE student who fainted: I want to carry on serving with pride and care
Passenger touched by cabby's kindness 'in a materialistic world' after daughter throws up
ITE student who passed out on bus wants to thank SCDF officer who saved his life
More About:
inspiring