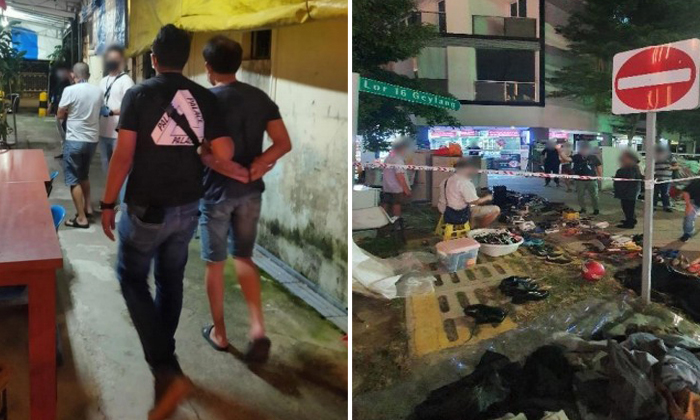 A total of 46 men and eight women, aged between 20 and 67 years old, are being investigated for various offences following a multi-agency enforcement operation conducted between June 22 and June 26.

As part of the operation, nine men, aged between 28 and 62 years old, were investigated for various offences under the Health Products Act and the Customs Act.

Cough syrup, an assortment of sexual enhancement products and other illegal medicines with a street value of close to $26,000 were seized.

As part of enforcement efforts against illegal activities, the police raided two units along Lorong 13 Geylang.

A total of 19 men, aged between 20 and 59 years old, were nabbed for suspected offences under the Common Gaming Houses Act and Remote Gambling Act.

Cash amounting to more than $700, computer terminals and various gambling-related paraphernalia were seized from the units.

A unit located along Ubi Avenue 3 was also raided and found to be operating as a public entertainment outlet without a valid license.

One of the men was arrested under the Employment of Foreign Manpower Act and will be assisting in police investigations for offences under the Public Entertainments Act.

The individuals will be investigated for offences under the COVID-19 (Temporary Measures) Act 2020 for failing to comply with safe distancing and safe management measures.

Three men, aged between 52 and 67 years old, were believed to be involved in illegal hawking activities and were issued with summonses under the Environmental Public Health Act for hawking secondhand goods (such as clothing and shoes) in a public place without a valid licence from the Singapore Food Agency.

The goods displayed for sale were seized.

Investigations against all the individuals are ongoing.

Commanding Officer of Geylang Neighbourhood Police Centre, Deputy Superintendent of Police Lee Ting Wei said: "The police will continue to conduct enforcement against illegal activities in the Geylang lorongs, especially against the backdrop of the pandemic situation, where errant offenders willfully breach social distancing and safe management measures without regard for the society at large.

"I am thankful for the strong and continued support by law enforcement agencies in keeping Singapore safe and secure."