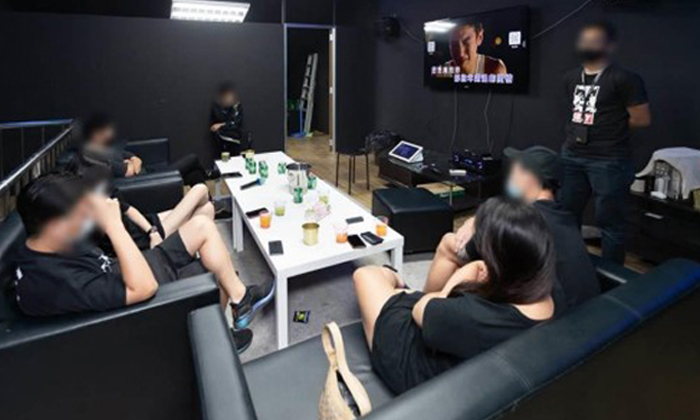 An enforcement operation conducted by the police against unlicensed public entertainment outlets along Kitchener Road and Verdun Road resulted in the arrest of eight people.

The raid was conducted between Friday night (April 2) and the early hours of Saturday.

Three outlets were found to have contravened the Public Entertainment Act, Liquor Control Act 2015, and the COVID-19 (Temporary Measures) Act 2020.

Six men and one woman, aged between 23 and 38, were nabbed for offences under the Liquor Control Act 2015 and Employment of Foreign Manpower Act.

One other 38-year-old man, established to have an outstanding warrant of arrest, was also arrested.

Items such as karaoke equipment and liquor were seized as exhibits.

A total of 34 men and 11 women, aged between 24 and 66, will also be investigated for allegedly flouting the rules and regulations under the Public Entertainment Act and Liquor Control Act 2015, as well as for their suspected breach of COVID-19 (Temporary Measures) (Control Order) Regulations for gathering in a group of more than eight people.

Under the Public Entertainment Act and Liquor Control Act 2015, the offences of providing public entertainment or supplying liquor without a valid licence each carries a fine of up to $20,000.

Under the Employment of Foreign Manpower Act, the offence of employing a foreign employee without a valid work pass carries a fine between $5,000 and $30,000, and/or a jail term of up to 12 months.

Under the same Act, the offence of being in employment without a valid work pass carries a jail term of up to two years and/or a fine of up to $20,000.

For non-compliance with safe distancing measures under the COVID-19 (Temporary Measures) (Control Order) Regulations 2020, offenders may be jailed for up to six months and/or fined up to S$10,000.

Action will be taken against the operators for flouting the rules and regulations under the Public Entertainment Act, Liquor Control Act 2015, COVID19 (Temporary Measures) Act 2020 and Employment of Foreign Manpower Act.

In a statement, the police said they will continue to take tough enforcement action against criminal activities and those found engaging in such activities will be dealt with in accordance with the law.

They added: "We urge members of the public to take the prevailing safe distancing measures seriously."