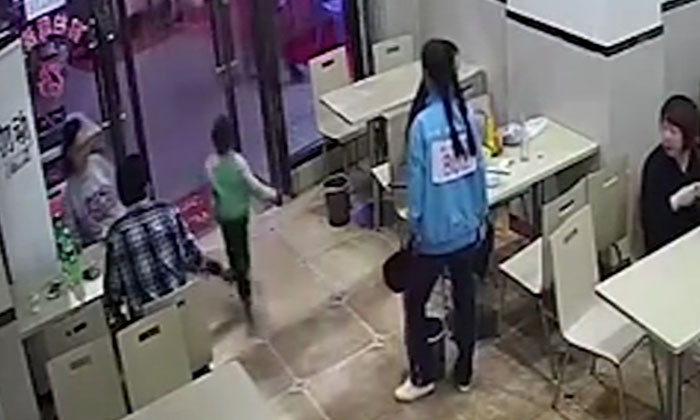 Apparently irritated by a toddler's behaviour, a pregnant woman intentionally stuck out her foot to trip him, resulting in him getting injured and suffering a concussion.

A video circulating online shows how the four-year-old boy ran through the restaurant entrance and past the pregnant woman.

This caused a plastic curtain hanging by the door to lightly graze the woman's face while she was eating.

The small boy passed her by again moments later and this time, she stuck her foot out, causing him to fall down.

The couple then continued eating while the boy's mother hurriedly came to help the boy up.

According to local media reports, the restaurant is owned by the boy's parents and he had been rushing to collect chopsticks from them.

The boy, who is believed to have a heart defect, was subsequently taken to the hospital where he was diagnosed with a mild concussion.

The pregnant woman has been heavily criticised after CCTV footage of the incident went viral.

"As someone who is soon going to be a mother, this act is really shameful," one woman said on Weibo, with her comment garnering over 21,000 likes.

Another netizen wrote: "I think this pregnant woman is overreacting. The child is still young and ignorant. You can tell him off, but you can’t tackle him. He is carrying chopsticks in his hand — what if you’d really hurt him?

"You’ll be a mother soon, aren't you afraid of your own children being harmed? Your aggression is not good for you baby. You're an adult — shame on you!"

The boy's mother was "so angry she called the police", after her son told her what happened.

She told China Youth Daily: "Police said they would detain the woman for 10 days and penalise her 1,000 yuan (around S$210), but she is seven months pregnant.

"We do not wish to affect her. I have children myself. I can understand."

The pregnant woman later turned herself in and apologised.

She also offered to pay the boy's medical expenses, and was given a short, suspended police sentence in addition to the 1,000 yuan fine.