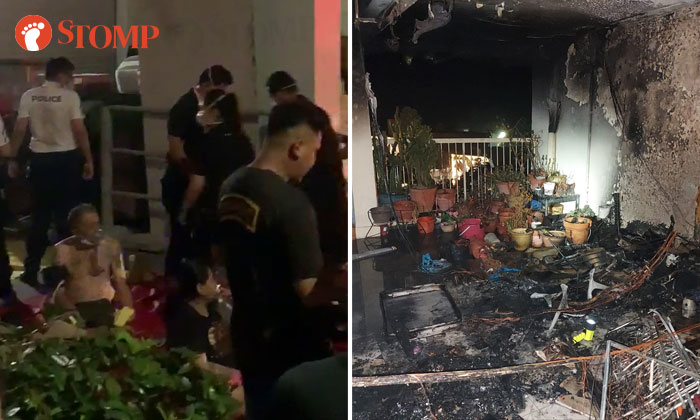 Four people were taken to hospital after a fire broke out at Block 3 Telok Blangah Crescent on Monday evening (Sep 6).

Stomper Irfan alerted Stomp to the incident and shared photos and videos of residents gathered at the foot of the block where some were being assessed by Singapore Civil Defence Force (SCDF) officers.

The SCDF said in a statement on its Facebook page that they were alerted to the fire at 8pm.

"The fire involved numerous items that had been placed along the corridor of the 9th floor," the statement said.

[Fire @ Block 3 Telok Blangah Crescent] At about 8pm today (6 Sept), SCDF was alerted to a fire at the aforementioned...

The fire was extinguished with a water jet.

SCDF and the police evacuated over 100 residents from units from the 9th to 12th floors.

Several residents had also self-evacuated from the premises prior to SCDF’s arrival.

Eight people were assessed for injuries, four of whom were conveyed to Singapore General Hospital and the remaining four refused conveyance to the hospital.

The SCDF added that items placed along corridors may hamper fire-fighting efforts, fire evacuation and conveyance of patients during a medical emergency.