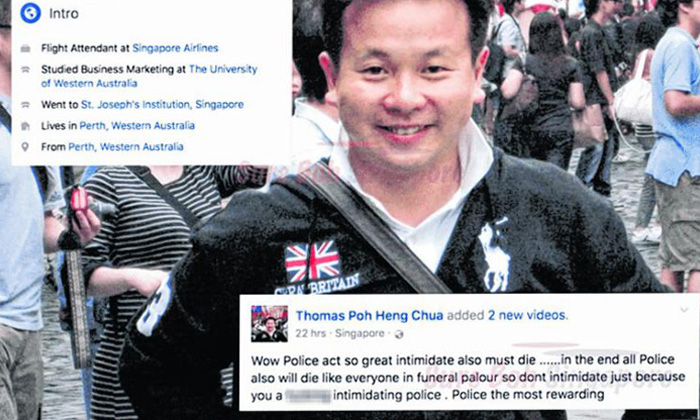 A man threatened to release a sex video of his girlfriend in order to prevent her from reporting him after he went on a $1,000 shopping spree with a lost debit card that she had found.

Chua took the card after she returned to the car where he was waiting and told him what she had found.

She had intended to hand it to the bank, but Chua told her that the card could be used.

Chua then threatened his girlfriend the next day to not report him.

According to Deputy Public Prosecutor Huang Jiahui, the video was made a few days earlier with the consent of the girl. She is clearly visible in the video.

On the night she received the WhatsApp messages, the girl lodged a police report.

For his offence, Chua was sentenced to 18 months' jail on Tuesday (Sep 11) after pleading guilty to one charge of criminal intimidation, two of cheating and one of dishonest misappropriation.

This was not the first time he had fallen foul with the law.

Chua was also caught for shoplifting at Mustafa Centre in Jun 2017, where he stole a 100ml bottle of Must de Cartier perfume worth $98 and tried to flee when he was caught by a security officer.

He then stopped and offered to pay for the perfume when chased by security personnel.

Following the incident, Singapore Airlines clarified that Chua was not an employee of the company, amidst rumours that he worked there.

Chua also shoplifted a pair of underwear from Spa BSfit at Festive Hotel in Sentosa in Dec 2017.

It was also earlier reported on Stomp that Chua had caused some controversy online for criticising a Traffic Police officer who was killed on patrol in a Facebook post.

For each count of cheating and dishonestly inducing a delivery of property, Chua could have been fined and jailed up to 10 years.

Related Stories
18-year-old man arrested for allegedly threatening to upload sex video of woman
Taiwanese woman in hot water after video of her soliciting sex and charging up to $4.3k for 'services' goes viral
Woman who threatened to expose BF for running away after having sex finally reveals his identity
More About:
extortion
sex
video
arrest
online