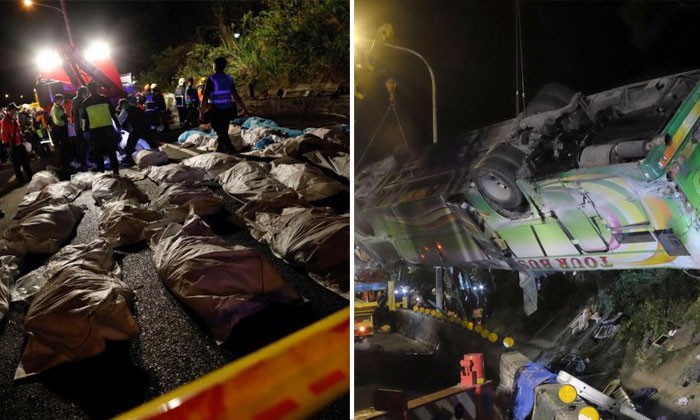 A Taiwan bus was bringing elderly local tourists home from visiting seasonal cherry blossoms at Wuling farm in the central region of Taichung when it careered off a highway yesterday (Feb 14) night which left 32 people dead.

The bus veered off a motorway in the capital Taipei and according to local media, it was torn off and its occupants were tossed onto the roadside.

A dashcam footage from a vehicle behind the bus showed it heading towards a bend in the road and disappearing off the edge of the highway.

According to Agence France-Presse (AFP) via AsiaOne, reports mentioned that police are investigating whether the driver of the bus was speeding at the time.

32 people had been killed while 12 are still getting treatment in a hospital.

Most are with serious injuries, according to the national fire agency.

Deemed as the "worst road accident for 30 years" by Taiwan's Central News Agency, the bus was carrying 44 people and was left flipped over on the side of the road.

He confirmed that the crashed vehicle was a sightseeing tour bus.

The victims' bodies were laid out at the crash site covered in white and blue cloths while two cranes attempted to lift the toppled bus.

Taiwan President Tsai Ing-wen and Premier Lin Chuan gave their condolences and Tsai mentioned that the authorities must "make all efforts to save the injured people and properly handle the aftermath".

The 19-year-old bus belonged to an agency which runs tours across Taiwan.

It is the worst highway accident since 1986 when 42 people died after a bus fell into a river in central Taiwan as reported by Channel NewsAsia.