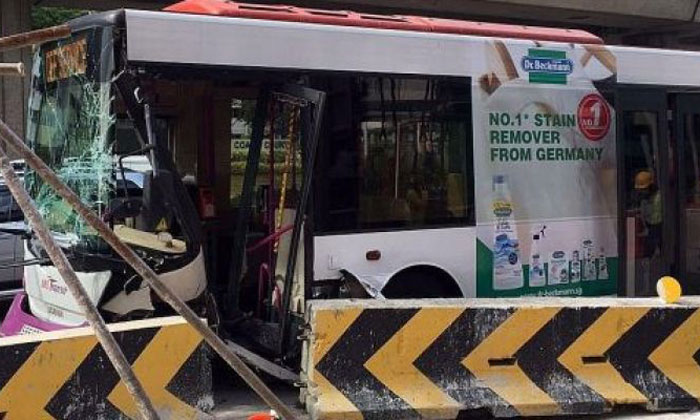 He was on his way to work yesterday, when the bus he was in suddenly jerked and came to a stop.

Mr David Lim, 29, a merchandiser, was stunned for a few seconds before he realised the SBS Bus Service 185 had hit a temporary road divider.

The impact of the crash shattered a glass panel in the bus near its exit door.

Two female passengers sitting just behind the exit door were injured as a result.

According to Mr Lim, one of them had a bruise on her head, while another woman had cuts on her face.

Both were taken to hospital.

The windscreen of the bus was also smashed.

The accident happened at the junction of Commonwealth Avenue West and Clementi Road, near Darussalam Mosque, at about 9.30am.

Mr Lim, who was sitting on the facing seats at the front of the bus, told The New Paper he was lucky he had been holding on to a pole.

Some of the shards of glass from the shattered windscreen landed on his arm, but did not injure him.

His iPhone 6 Plus, which landed near the bus driver's seat, was also undamaged.

He said there were at least 10 passengers on the bus. All were seated.

He added: "It happened so quickly and it could have been worse. Fortunately, the auntie who was sitting just across from me was holding the pole as well."

Mr Lim added that everyone, including the driver, remained calm after the accident.

He said: "The driver also apologised to all of us. Everyone was quite shocked and just stayed in their seats for a while.

"Some people offered tissues to the (injured) women, and both of them didn't seem to be able to talk for a while."

The bus driver said a car in front of them had suddenly changed lanes, Mr Lim said.

"When I got out of the bus, I was shocked to see the damage at the front. I'm glad the bus driver was not injured."

A Singapore Civil Defence Force spokesman said it sent two ambulances to the scene, and two people were taken to the National University Hospital.

The police said the two passengers, a 38-year-old woman and a 66-year-old woman, were conscious when they were taken to the hospital.

Ms Tammy Tan, senior vice-president of corporate communications, SBS Transit, said: "We are in touch with the two injured passengers to find out how they are. Both of them received outpatient treatment and we will be rendering them assistance as best we can.

"Meanwhile, we are assisting the police with their investigations."

Related Stories
Man trapped under SBS bus after accident in Hougang: "His legs looked flattened"
Man in his 60s dies after getting run over by bus outside Toa Payoh interchange: 36-year-old bus driver arrested
Elderly pedestrian's leg so badly mangled in bus accident it had to be amputated
More About:
accident
Bus
injured