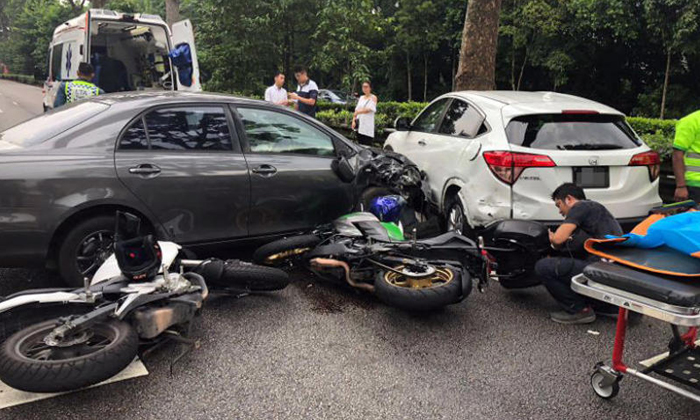 Three people were taken to hospital after an accident involving two cars and two motorcycles along the Bukit Timah Expressway (BKE) on Thursday (July 19).

The police told Stomp that they were alerted to the accident, which occurred in the direction of the Pan-Island Expressway (PIE), at 8.17am.

They sustained minor abrasions on their arms and legs.

The Singapore Civil Defence Force (SCDF). who responded to the accident at around 8.30am, said it conveyed a third person to KTPH.

One of the cars had been carrying a pregnant passenger, but she was unhurt, reported Lianhe Wanbao.

According to The Straits Times, the accident happened when one of the cars had braked. A second car behind could not stop in time and crashed into its rear.

While unsuccessfully trying to avoid the first car, the second car swerved into the centre lane, where two motorcycles crashed into it.