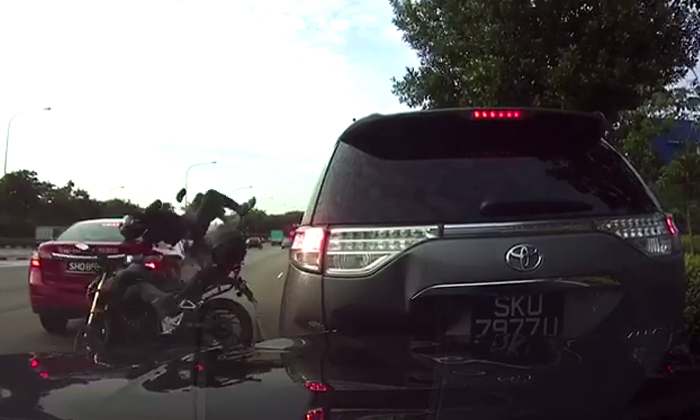 A motorcyclist and his female pillion rider were taken to hospital after a chain collision involving four vehicles along the Central Expressway (CTE) on Monday morning (June 18).

The accident, which involved the motorcycle, a taxi and two cars, occurred in the direction of the Ayer Rajah Expressway (AYE), before the Ang Mo Kio Avenue 1 exit.

Stompers Shawn and Gary alerted Stomp to a circulated video that shows how the accident happened.

The impact of the crash caused the two people on the motorcycle to be flung onto the road.

In response to a Stomp query, the police said they were alerted to the accident at 8.19am.

The motorcyclist and his female pillion rider, both aged 26, were both conscious when conveyed to Tan Tock Seng Hospital.

Related Stories
Motorcyclist and pillion rider thrown off bike after getting side-swiped by driver
Driver sends motorcyclist and pillion rider flying after recklessly cutting across lanes on SLE
Biker thrown off motorcycle after getting side-swiped by car, nearly hit by truck
More About:
accident
chain collision
biker
motorcycle