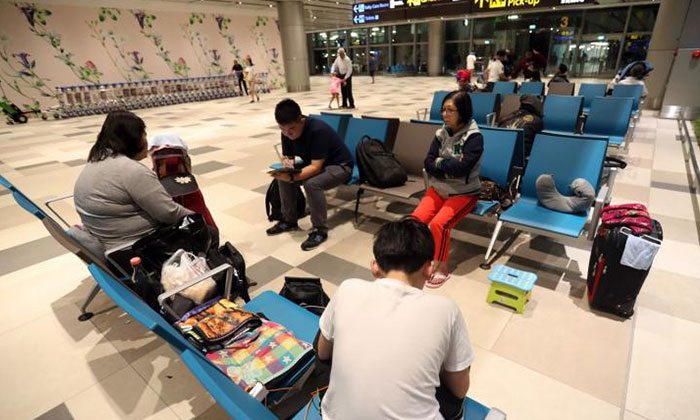 A three-generation family decided to ‘move’ to Changi Airport six days into their stay at a shelter.

The family has stayed at the airport for two months and intends to spend the Lunar New Year there as well, albeit not being able to have a reunion dinner.

Jolene Phea Hui Eng 45, told Lianhe Wanbao that since selling her flat off in 2016, she, her 74-year-old mother, and 13-year-old son have been moving between two-room rental flats.

Due to the family owing rents, they were forced to move more than 10 times, reports Lianhe Wanbao.

As her savings depleted, Ms Phea and her family could no longer afford a rental flat.

In December 2017, the family moved to a transitional shelter.

However, they were unhappy with the arrangements and just six days after moving in, decided to 'move' to Changi Airport instead.

Said Ms Phea: "We usually spend daytime between Terminal 1 and 3. At night, we’ll sleep at the sofa seats in Terminal 4."

Although there is air conditioning at the airport, Ms Phea said that life has not been a bed of roses.

She said: "We are unable to shower at the airport, and we can only use a wet towel to clean ourselves. We’ll occasionally head to a public swimming complex to bathe."

Ms Phea also claimed that she was so poor that all she had was $5 cash.

At times, kind passersby would deliver bread to the family but most days, the family would spend around $1.60 on two plates of plain chicken rice that they will share.

The concerned mother confessed that her growing son does not have enough to eat, adding: "We can only afford bread and water to fill his stomach."

Ms Phea said that her son is currently a Secondary 2 student at Punggol Secondary School, and even if he takes the first train every morning, will only be able to reach the school at about 7.30am.

As such, he is late all the time, but she is unable to do anything about the frustrating situation.

She lamented: "We stay at Changi Airport. Every day, people would look at us differently. Chinese New Year is approaching, but we have no home nor do we have money for a reunion dinner. I don’t know how we will be able to spend the Lunar New Year like this."

In response to media queries, a spokesman for the Ministry of Social and Family Development (MSFD) said that the Punggol Family Service Centre has been alerted to the situation, and Ms Phea was granted ComCare subsidy between January and March 2018.

A worker from Punggol Family Service Centre has also provided additional help to the family and arranged for them to move into the transitional shelter in December 2017.

MSF also said that it will continue to work with partners to ensure that the family is being provided with the help it needs.