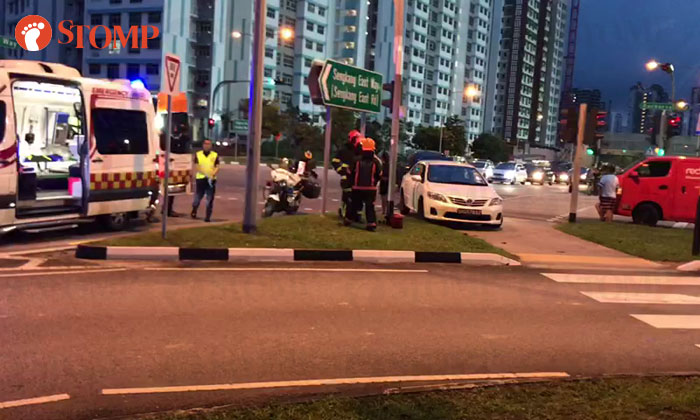 Three children, aged between two and nine years old, were taken to hospital after an accident involving two cars occurred at the junction of Anchorvale Road and Sengkang East Way on Wednesday evening (Nov 7).

Stomper Koh alerted Stomp to the incident and shared a video he took at about 6.50pm.

He saw an ambulance and fire truck arrive at the scene.

A group of onlookers had gathered around the victims on the sidewalk.

Stomp understands that the two cars involved in the accident were a white Toyota and grey Honda.

The Toyota was making a right turn to Anchorvale Drive when it hit the Honda.

The green light was in favour for both vehicles but considering the situation, the Toyota should have given the Honda right of way.

The three children, one girl and two boys, were passengers in the Honda.

The police told Stomp they were alerted to the incident at about 6.51pm.

The children were taken to KK Women's and Children's Hospital.