Female driver, 50, taken to hospital after van flips over in accident at Yio Chu Kang Rd 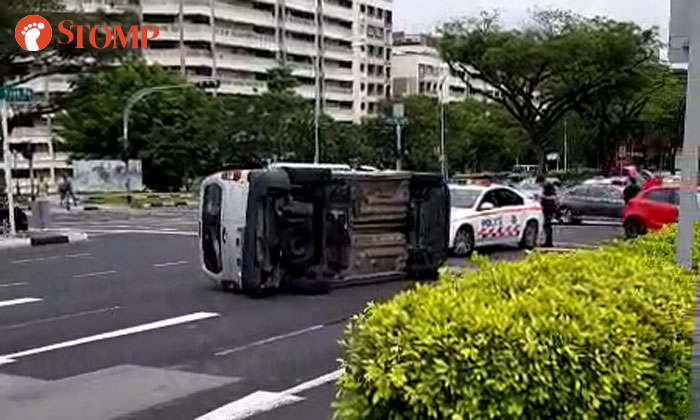 A 50-year-old woman was taken to hospital after the van she was driving flipped over in an accident with a car at Yio Chu Kang Road on Thursday afternoon (Nov 1).

Stomper Saravannan alerted Stomp to the accident and shared a video he took of the toppled vehicle at about 1pm.

He told Stomp he was walking on his way home when he saw the accident scene near Bowen Secondary School.

In the video, the van is lying on its side and a police car is behind it.

A red car is parked a few metres away.

Saravanan said that the red car suffered damages to its front: "The red car's front was totally gone."

In response to a Stomp media query, the police said they were alerted at about 11.37am to an accident involving a van and a car at the junction of Yio Chu Kang Road, Hougang Avenue 2 and Ang Mo Kio Avenue 3.

The Singapore Civil Defence Force (SCDF) received a call for assistance at about 11.40am.

"The van driver, a 50-year-old woman was conscious when conveyed to Sengkang General Hosptial," a police spokesman said.

Stomp understands that the van driver was driving along Yio Chu Kang Rd toward Upper Serangoon Road when she noticed a red car coming from the opposite direction making a right turn.

She was unable to stop in time and collided with the car, causing her vehicle to flip over.

The car driver saw the van approaching but thought she was going to turn left instead of heading straight.