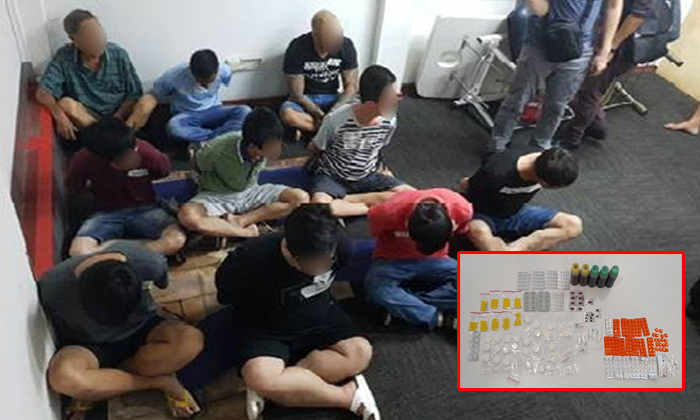 The police have hauled up 214 men and 47 women, aged between 16 and 76, for various offences in a multi-agency joint operation conducted from June 24 to June 29, and July 1.

During the operation, 75 men and four women, aged between 16 and 76, were arrested for various offences under the Common Gaming Houses Act, Societies Act, Misuse of Drugs Act and Customs Act.

A total of 1157 packets of duty-unpaid cigarettes from assorted brands were seized.

The total excise duty and Goods and Services Tax (GST) evaded amounted to about $10,080 and $740 respectively.

In addition, 8,999 units of assorted tablets and 47 bottles of cough syrup with an estimated street value of $13,000 were seized.

Raids and enforcement checks were also conducted at various public entertainment outlets and massage establishments. Eight of these venues were found to have breached licensing conditions.

104 men and 26 women, aged between 18 and 68, were hauled up for their alleged involvement in loan scams and loanshark activities. Of these, 48 men and 13 women were arrested for offences under the Moneylenders Act.

These suspects are involved in cases with transactions that amount to at least $1.9 million.

Police investigations against all suspects are ongoing.

Deputy Assistant Commissioner of Police, Julius Lim, Commander of Bedok Police Division, expressed his appreciation to all the officers and agencies in the operation.

He said: “This joint operation is part of the Police’s enduring commitment to keep our neighbourhoods safe and secure.

"While the scale of the operation was large, it does not mark the end of our efforts.

"Bedok Police Division will continue to work closely with other Home Team and law enforcement agencies in the fight against crime.

"We hope the public will join us in staying vigilant.”