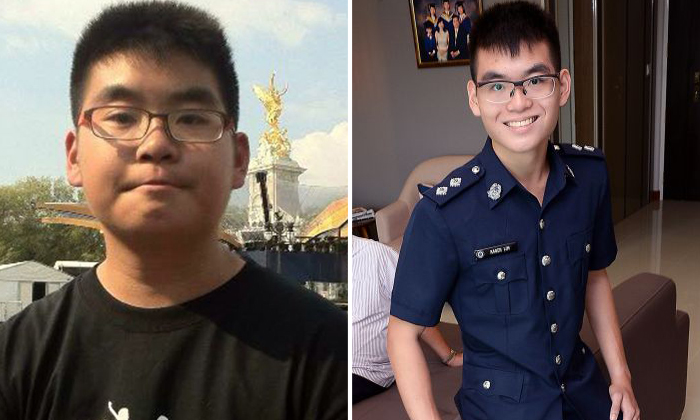 For four years, the Chongfu School pupil would drink bottled coffee or tea after school almost every day.

His weight ballooned, tipping the scale at over 70kg.

Desperate to become a policeman, he shed 20kg, hit the books and became one of three men awarded the Singapore Police Force (SPF) Scholarship on Aug 11. (See report)

As a child, Mr Lim loved to snack and could not go more than a day without fried food such as popcorn chicken and onion rings.

He said: "One of my friends commented that he never saw me without that little bag of food in my hands. I enjoyed fast food and sweet drinks a lot. I didn't see the need to cut down on them or to exercise."

When he went to Catholic High School, he joined the Scouts but continued his unhealthy lifestyle.

When The New Paper visited his family's five-room flat at Punggol on Aug 13, Mr Lim's parents said their youngest of four children used to skip tuition to attend Scouts activities.

Housewife Mabel Lan, 56, told TNP in Mandarin: "During secondary school, Kagen placed his CCA (co-curricular activity) as top priority. He would volunteer for all the activities and neglected his studies."

In Secondary 3, Mr Lim took on a leadership role in the Scouts.

"It was the very first instance when I felt that I should be a good role model for those under my charge," he said.

He began to feel inadequate because the juniors could outdo him at physical activities such as climbing the low rope at the fitness corner. He was among the last to complete a 2.4km run.

"I felt like I wasn't leading by example and I was being hypocritical by expecting excellence out of my juniors when I could not do it," he said.

That year, Mr Lim failed Higher Chinese and Physics, making him realise he needed to change.

"I already knew I wanted to join the police force, so I needed to be more disciplined."

Mr Lim said he realised his calling was to become a policeman in Primary 3 when he saw a group of secondary school students beat up another student.

His mother called the police and took him home.He saw the police cars arrive from his window.

"That was a reassuring moment for me, to see the police respond," he said.

In Secondary 4, Mr Lim topped his cohort for his English preliminary examinations. He also started running and exercising regularly.

By the time he entered National Junior College, he had shed 10kg.

Now, he runs 4km to 5km a day. He has also stopped eating fried and fast food - save for social occasions.

Mr Lim was awarded the SPF Book Prize, which is given to JC 1 students who excel in academics and CCA. This motivated him to apply for the scholarship this year.

He is studying psychology at the National University of Singapore under the University Scholars Programme and will graduate in 2020. He is planning to get a master's, possibly in criminology.

Following his graduation, Mr Lim will serve a four-year bond with the SPF.

Madam Lan said she was initially worried about the dangers of the job.

"But seeing him so passionate about this, we respect his decision. His choice is the most important," she added.

Mr Lim said: "In the past few years, I've achieved more than I thought I could, like getting gold for my Individual Physical Proficiency Test and doing my first few pull-ups."

The two other scholarship recipients are Mr Justin Tan and Mr Lua Jiong Wei, both 19.

"It is heartening to have such a committed young man join our ranks to ensure Singapore's safety and security in time to come."

As one of the most prestigious scholarships awarded by the Public Service Commission, SPF Scholarship has three recipients this year - Mr Justin Tan, Mr Lua Jiong Wei, and Mr Kagen Lim.

During the ceremony, 21 other recipients were presented the HUS Scholarships.

The scholars will pursue their studies in various disciplines at local or overseas universities.