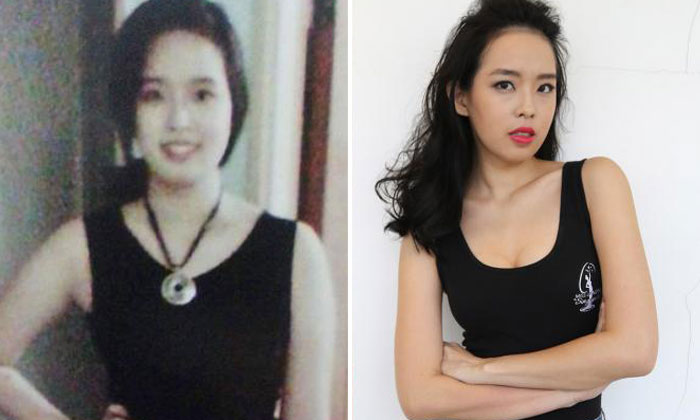 When Miss Luisa Gan first wanted to break into the modelling industry in 2014, she was rejected because she was "too fat".

The 1.74m-tall business and management graduate from the Singapore Institute of Management weighed 68kg at her heaviest.

The 22-year-old model and freelance actress with Mediacorp, who has appeared in popular Channel 8 dramas like You Can Be An Angel Too and Peace And Prosperity, told TNP: "I really wanted to do modelling and acting and the main reason why people were rejecting me was over my weight."

One interviewer at an agency even told her to her face: Come back when you're skinnier.

Miss Gan e-mailed 19 modelling agencies in Singapore, only to have about five of them reply to say that she was not what they were looking for.

She said: "I felt so demoralised. I knew I had to do something to prove them wrong."

She went on to lose 20kg in nine months, and her jeans waist size dropped from 31 to 23.

Every other day, she would spend one-and-a-half hours walking 10km. On the other days, she would hit the gym for the same period of time.

Her food choices also took a drastic turn when she gave up eating bread and rice for three months and did not eat after 6pm.

However, her greatest sacrifice was giving up chocolate and desserts, something she enjoyed.

"It was terrible at first... I was a little bit undisciplined, but I slowly got used to it," she said.

Miss Gan, who weighs 53kg and is not signed to any agency, said: "It was a great accomplishment for me. But most of all, I have shown that I can conquer the impossible and that I am not someone to be looked down upon.

"I wanted to prove the agencies wrong, that I am disciplined enough to lose weight and suited to be a model."

Related Stories
S'porean man loses 51kg: Getting headaches and high-blood pressure was a wake-up call
125kg woman gets ultimate revenge on jealous ex-BF who wanted her to stay obese
Plastic surgery goes horribly wrong for woman 3 months after she got fillers
More About:
get inspired
inspiring
weight loss
transformation