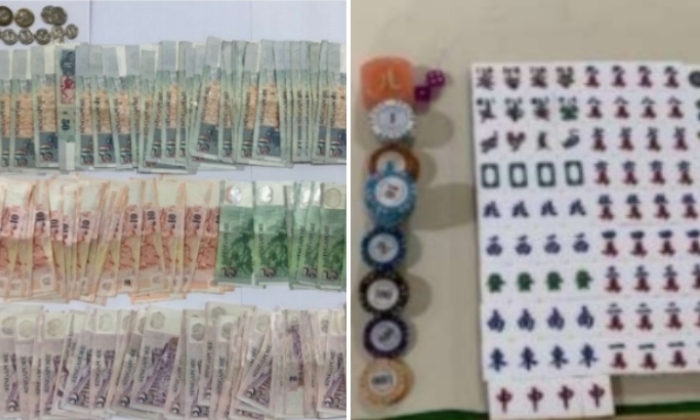 The police arrested 15 men and seven women, aged between 28 and 80, during an enforcement operation against illegal gambling and betting on Saturday (Nov 28).

The operation, which was conducted by Woodlands Police Division in Yishun and Woodlands estates, saw ten men, aged between 47 and 80, get arrested for offences under the Betting Act.

The police said in a statement that another five men and seven women, aged between 28 and 61, were also arrested for offences under the Common Gaming House Act.

Cash amounting to more than $6,500 and several gaming-related paraphernalia were seized as case exhibits.

The suspects are also investigated for breaching safe distance measures under the Covid-19 (Temporary Measures) Regulations 2020.

Under the Common Gaming Houses Act, the offence of gaming in a common gaming house carries a fine of up to $5,000, a jail term of up to six months, or both.

Additionally, the offence of using a place to operate, or assisting in managing a common gaming house carries a fine of not less than $5,000, up to $50,000, and a jail term of up to three years.

Under the Betting Act, the offence of placing bets with a bookmaker carries a fine not exceeding $5,000, a jail term not exceeding six months, or both.

The offence of being involved in bookmaking carries a fine of not less than $20,000 and not more than $200,000, and a jail term not exceeding five years.

The police said in the statement that they will continue to clamp down on criminal activities, including illegal gambling.

"Those found engaging in illicit activities will be dealt with sternly in accordance with the law," added the police.