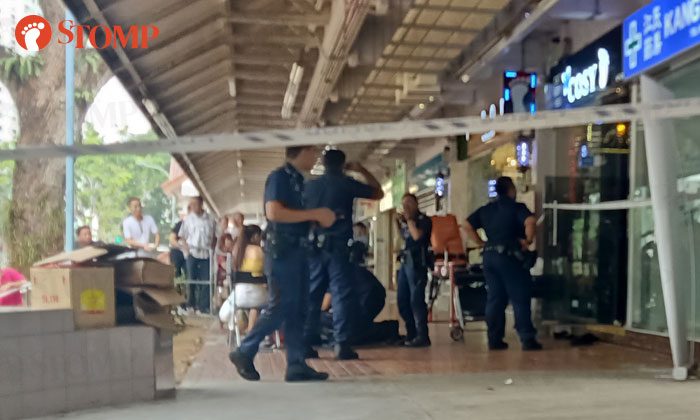 Three men, aged between 37 and 50, have been arrested for their suspected involvement in a case of robbery with hurt at Ang Mo Kio on Monday (Sep 23).

Stompers Tiger and Kenneth alerted Stomp to the incident at Block 532 Ang Mo Kio Avenue 10 and shared photos they took at the scene.

Tiger had just finished work and was having a drink at a coffee shop at the corner of the block at about 3pm when he saw a commotion in front of COSY Spa.

"There were around 20 to 30 police officers with guns," he said.

"I saw a woman in a yellow T-shirt being attended to by paramedics outside the shop.

"It appeared to be a minor cut."

The police said in a statement on Tuesday morning (Sep 24) that they received a report on Monday at 3pm that two female victims were slashed by a penknife, which was used by one of the suspects.

The two victims and their colleague were robbed of five handphones.

Officers from Ang Mo Kio Police Division established the identities of the three men through ground enquiries and with the aid of images from nearby CCTV cameras and arrested them.

The three men will be charged in court on Wednesday (Sep 25) with robbery with hurt.

If found guilty, they will each be sentenced between five to 20 years' jail and up to 12 strokes of the cane.