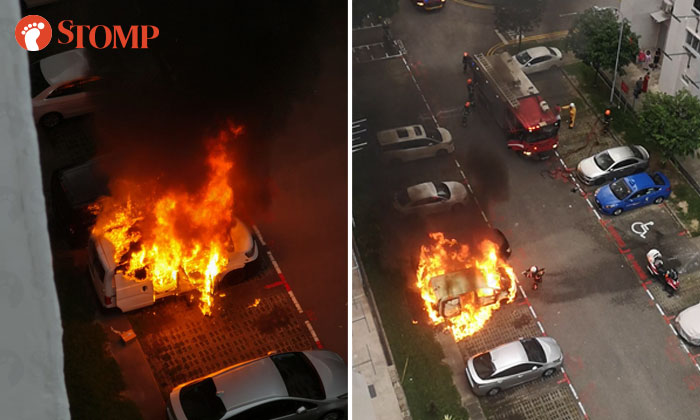 Two vans were involved in a fire at an open-air carpark near Block 315 Ubi Avenue 1 on Thursday (Jan 21).

Stomper DJ alerted Stomp to the fire and shared videos and photos of the incident he took from his HDB unit at around 5.50pm.

"I heard a loud explosion and glass shattering from a vehicle and immediately called 995," he said.

"Some people tried to put out the fire using a nearby water hose but it was a failed attempt."

The Stomper added that he saw the two van owners talking to each other after the incident.

"One vehicle is still at the same spot today (Jan 22). The road is damaged."

In response to a Stomp query, the Singapore Civil Defence Force (SCDF) said they were alerted to the fire at 5.55pm.

"The fire involved the engine compartment of a van," an SCDF spokesman said.

"A van that was parked adjacent to the burning vehicle was also affected by the fire.

"SCDF assessed one person for smoke inhalation and the person subsequently refused conveyance to the hospital."