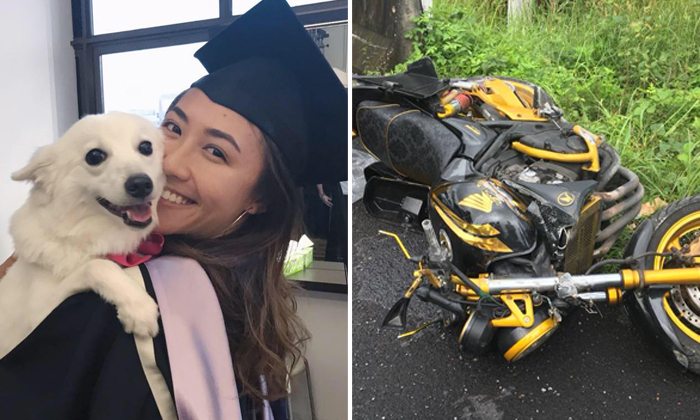 A horrific motorcycle crash in Thailand's southern Phatthalung province on New Year's Eve (Dec 31) has claimed the lives of a Singaporean couple.

Mr Ng Yong Sing, 27, was riding a motorcycle with Ms Vanalyn Png, 22, as his passenger when they were thrown into a three-metre deep drain at around 1.20pm.

The Singapore-registered motorcycle, a Honda CB400 Super Four, is believed to have skidded on a wet road, reported The Straits Times.

According to Thai reports, Mr Ng died in the crash.

Ms Png, who suffered from broken arms and internal bleeding in her head and abdomen, was taken to a hospital, where she was placed in intensive care.

She succumbed to her injuries just past midnight on Jan 1.

Her brother, Mr Jervis Png, confirmed the accident on Facebook and wrote: "The doctor tried hard, but they couldn't save her. Vanalyn fought the battle bravely and she lost... She's now in a better place."

"Vana was a happy go lucky person, always cheerful and infecting people around her with her contagious laughter. All I can say is, she lived her life too the fullest, and was happy till her last day," added Mr Png in his emotional post.

Both victims were employees at the Select Group food and beverage chain.

Mr Ng was a business development executive who had recently received a scholarship from the company, while Miss Png started as a marketer less than six months ago.

According to ST, the pair left for Malaysia on Saturday and were due to return to Singapore today (Jan 2).

However, Ms Png's siblings said she had not told the family that she was heading to Thailand. They were also not told that she was travelling with Mr Ng or doing so on a motorcycle.