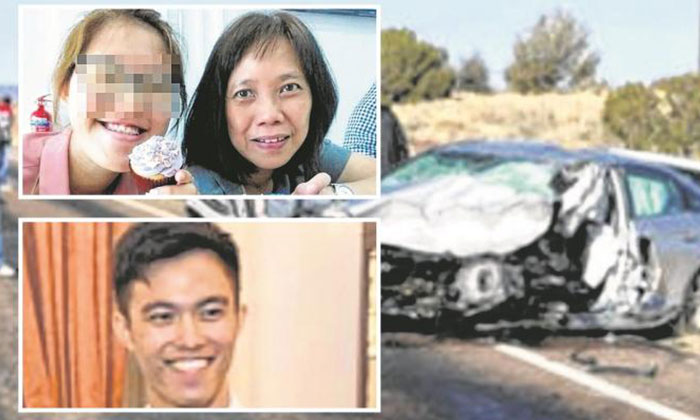 A Singaporean family of four was on a vacation in Arizona when they were caught in an accident, killing the couple — 62-year-old Mr Yeo Heng Soon, 56-year-old Madam Chua Cher Hwee — and their son, Mr Justin Yeo Jun Xi, 22.

The couple’s daughter, Ms Justlyn Yeo Jing Hui, 19, was the sole survivor of the accident which happened on Friday (Dec 22) around 2.21pm local time (5.21am, Saturday in Singapore).

Justin, a Singapore Armed Forces (SAF) scholar, was a sophomore at the University of California, Berkeley, and the family had gone on a holiday to visit him.

He was among the top A-level graduates in Dunman High School in 2013, and received the SAF Merit Scholarship in 2015, reports The Straits Times.

As a university undergraduate, he co-founded Dingo, an app that allows users to easily notify friends when they have reached their intended destination, without having to send out text messages. He had also recently joined an entrepreneurship fraternity.

The family was travelling in a silver Hyundai towards the Grand Canyon when their car crossed the painted median and collided head-on with a green Dodge van, and crashed into a third vehicle.

Justin was driving the vehicle during the time of the accident.

Mr Yeo, Madam Chua, and Justin were pronounced dead at the scene.

Ms Yeo, survived and was conveyed to Flagstaff Medical Center where she is believed to have undergone spinal surgery.

The first-year student at the Nanyang Technological University’s (NTU) Wee Kim Wee School of Communications and Information is reportedly in a stable condition after being transferred out of the intensive care unit (ICU).

Relatives have flown over from Singapore to the United States to take care of her.

A neighbour of the Yeos told Lianhe Wanbao that the Yeo siblings were polite, filial and quite close to one another.

Following the accident, a 70km stretch of the highway was closed off for seven hours to allow investigations to take place.

The driver of the Dodge van which fell into a ravine following the collision, is from Spain and also died at the scene.

A total of five people, including four passengers in the Dodge van were injured.

There were no reported injuries from the third vehicle.