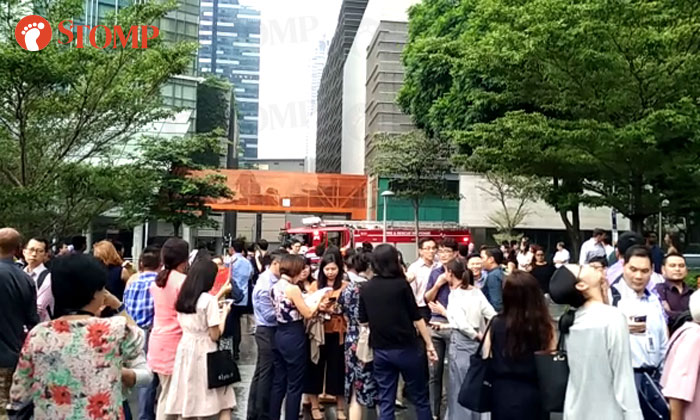 Two people were taken to hospital after a fire broke out at NTUC Centre on Monday afternoon (Oct 29).

Stomper J, who works in the building, alerted Stomp to the fire after she was told to evacuate.

"After a few minutes, there was another bell and an announcement telling us to evacuate the building.

"We evacuated via the fire staircase.

J shared a video showing dozens of people gathered in the open area in front of NTUC Centre.

"It was drizzling at the time so some people were standing under the building before Singapore Civil Defence Force (SCDF) personnel told them to move out.

"We were told to move further away from the building, about 10 to 30 metres."

"It looks like everyone was evacuated but I saw one lady receiving medical attention.

"I hope the 2 people taken to hospital recover.

"At firs,t we were wondering whether the fire drill date that was scheduled for Wed (Oct 31) had changed last minute."

J said that she returned to her office at about 4.35pm.

In response to a Stomp media query, the SCDF said it was alerted to the incident at about 3.35pm.

"The fire was extinguished by a staff member in the building using four 2kg fire extinguishers prior to SCDF's arrival," a spokesman said.