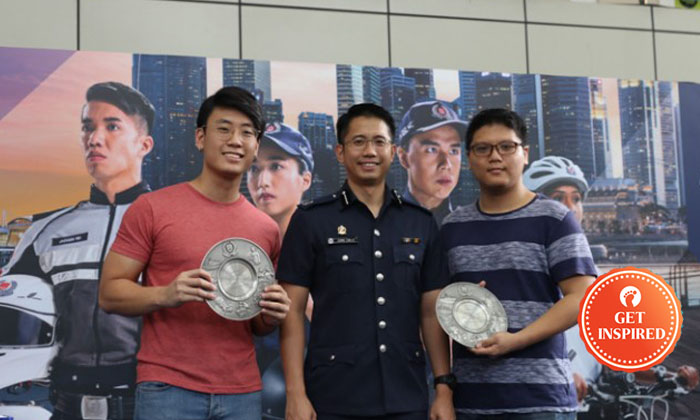 Mr Chow Jin Jun and Mr Wong Jing Hao were commended for assisting the police in detaining a man who looked up a woman's skirt at Braddell MRT Station.

A ceremony was held during the Police Community Roadshow 2018 on Sunday (Nov 25) at Toa Payoh HDB Hub, where the men were given public spiritedness awards for their assistance in the case of public nuisance.

Mr Chow was on the escalator at Braddell MRT Station on Nov 1 at about 9.40pm when he saw a 36-year-old man looking up the skirt of a woman.

He quickly alerted the victim, who then called the police.

When the man tried to flee, Mr Wong stepped in to help Mr Chow detain him.

Deputy Assistant Commissioner (DAC) of Police Chong Zunjie, Commander of Tanglin Police Division said, "Members of the public are advised to be vigilant of their surroundings.

"Mr Chow’s and Mr Wong’s willingness to step forward to assist the victim, leading to the arrest of the man was commendable.

"The police thank Mr Chow and Mr Wong for their public spiritedness. Such acts go a long way to help deter crime."