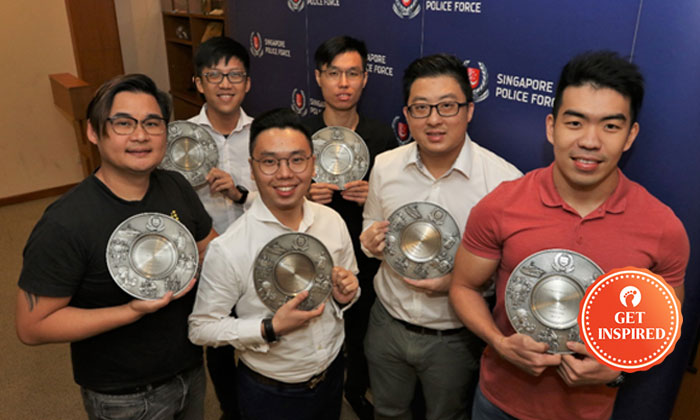 Six men were commended on Nov 20 for their public spiritedness in assisting the police to detain four men believed to be involved in three separate cases of public nuisance and a case of outrage of modesty.

In the first case on Oct 11 at about 6.30pm, Mr Toh was on an escalator at Serangoon MRT Station when he spotted a man standing very close to a woman.

He then noticed the man placing his mobile phone underneath the woman's skirt.

Mr Toh grabbed the man's mobile phone and alerted the woman before detaining the man and bringing him to the Station Manager, who called for the police.

In the second case on Oct 23 at 8.33am, TransCom officers responded to a case where a man had taken upskirt photos at Sembawang MRT Station.

Mr Lum, a Volunteer Special Constabulary officer, and Mr Tan informed the officers that they saw a man taking photos of a woman inside a train cabin.

When the woman confronted him, he quickly stopped the act and tried to keep his mobile phone.

However, Mr Lum, who was sitting next to the man, assisted to retrieve the mobile phone.

Both Mr Tan and Mr Lum detained the man before calling for police assistance.

In another incident on the same day at about 7.10pm, TransCom officers responded to a case of outrage of modesty at Yishun MRT Station.

Mr Liu saw a man molest a woman twice on an escalator leading to the linkway of the station.

Prior to this, Mr Liu had noticed the man had used his elbow to knock into another woman's arm near a bakery shop at the same station.

He continued to follow the man and observed him molesting the woman on the escalator.

Mr Liu then alerted the woman to the man's actions and with the assistance of Mr Khoo, detained the man and called for the police.

In the fourth case on Oct 25 at around 7.20am, TransCom officers responded to a case of man taking an upskirt video at Yio Chu Kang MRT Station.

Mr Thng had noticed a man behaving suspiciously by holding out his handphone while standing close to a woman on an escalator.

Being suspicious, Mr Thng followed the man to the platform and saw the man viewing what appeared to be an upskirt video recording.

Mr Thng then sought assistance from the station staff, who subsequently detained the man.

"Since the start of 2018, we have commended 19 members of the public for their public spiritedness," said Assistant Commissioner (AC) of Police Koh Wei Keong, Commander of Public Transport Security Command.

"This shows the strong partnership between the public and the Police in fighting crime.

"Such acts go a long way to help deter crime on the public transport network.

"Any would-be perpetrators of crime would also think twice before they act.

"We wish to advise commuters to continue to be vigilant to their surroundings when travelling in public transport."

Related Stories
Biker who stopped to direct traffic gets Goody Bag: "When I saw it on Stomp, I knew it was a big deal"
Men rush to stranded uncle's aid in Woodlands after seeing appeal for help on Facebook
2 men help to detain suspects who allegedly took upskirt photos of women in separate cases
More About:
heroes
public spiritedness
police
inspiring
outrage of modesty
public nuisance