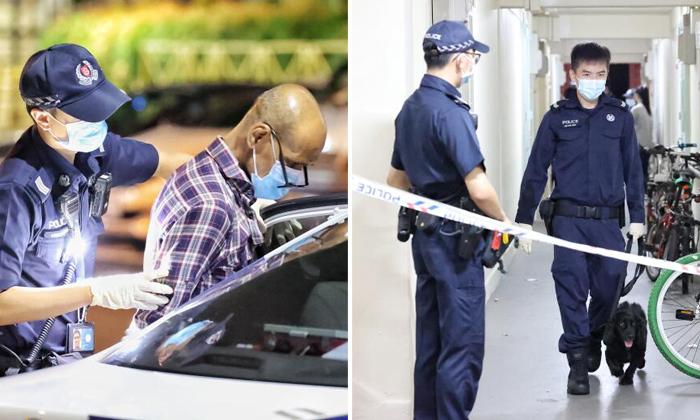 Two men have been arrested for criminal trespass and suspected drug-related offences following a stand-off with the police that lasted almost eight hours on Tuesday (May 3) in an HDB flat in Redhill.

The police received a call for assistance at 11.35am at Block 89 Redhill Close.

When officers arrived, the men, aged 59 and 62, were found to have locked themselves in a residential unit, the police said.

Officers from the Crisis Negotiation Unit, Special Operations Command and the Singapore Civil Defence Force (SCDF) were subsequently deployed to the scene, they added.

At around 6pm, SCDF received a call for help at the same block of one-room rental flats.

Two safety life air packs to cushion a fall were deployed, and rescuers from the Disaster Assistance and Rescue Team were on standby as a precautionary measure, SCDF said.

The Straits Times understands that the police gained access to the flat at about 7pm and did not have to force their entry.

When The Straits Times went to the rental unit at around 6.45pm on Wednesday (May 4), the door was padlocked and plastic bags containing food were hanging on the gate.

Neighbours said they saw about 10 police officers on Tuesday - some were carrying shields outside the unit, while others were stationed below the flat at a landing on the second floor.

Mr Martin Chan, 55, who has been living next to the unit for about four years, said: “For a few hours, the police kept knocking on the door and shouting ‘come out’.

“After I came back from lunch, the noise had died down but they were still knocking. I wondered why the police were still there because the flat was quiet, I didn’t even know someone was inside.” 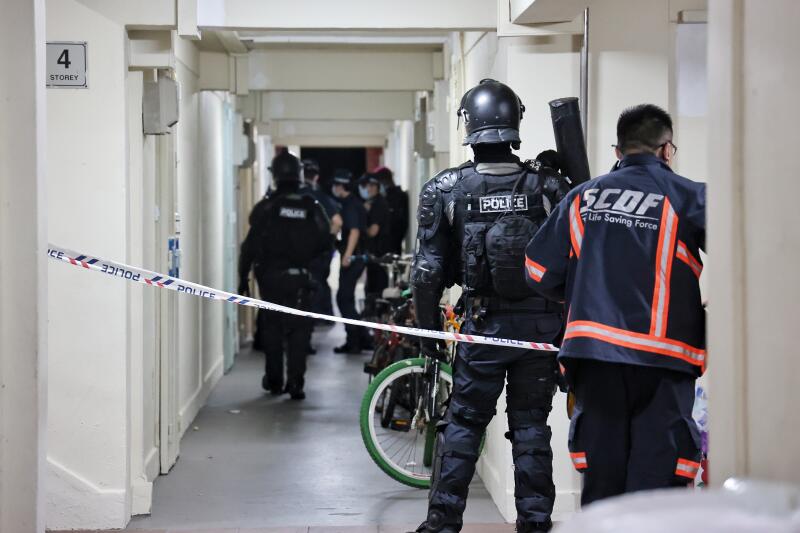 When officers arrived, the men were found to have locked themselves in the residential unit. Photo: Shin Min Daily News

Mr Chan, who works part time in logistics, said a man moved into the unit last year, but they did not interact with each other.

“I usually see him sitting alone in his kitchen because our flats are so near each other,” he said, adding that the last time he saw him was before Sunday.

“The flat is usually very quiet and there was only one visit that I noticed since he moved in. That was because the walls here are very thin, so I could hear him talking loudly to someone in his room.”

The Straits Times understands that the two men who were arrested do not live in the flat.

Madam Tan Juat Noh, 75, who lives diagonally opposite the flat, said she was surprised to see that the police had cordoned the block off with plastic tape when she returned at about 3.30pm on Tuesday and also saw three fire trucks there.

“I tried to see what the police were doing at the flat, but I was asked to close my door. Then, I just went to sleep,” she said in Mandarin.

“This is the first time I’ve seen so many police officers in the area in the past 10 years that I’ve lived here,” she added.

Another neighbour, who lives opposite the flat and who declined to be named, said the police eventually left at about 10.30pm.