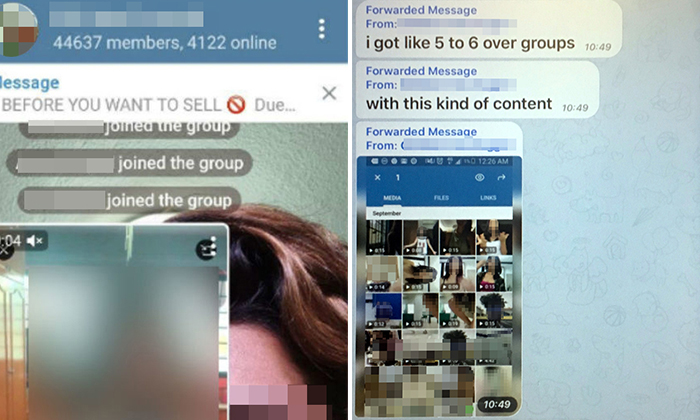 On Tuesday (Oct 22), Liong Tianwei was charged with three counts of transmitting pornographic material by electronic means. The 37-year-old, who was hauled to court last week, is already facing one charge for a similar offence.

He allegedly transmitted the pornographic material through Telegram into a chat group called SG Nasi Lemak on three separate occasions in June and July this year.

The 26-year-old is accused of having pornography in his electronic devices on Oct 14.

The pair were among four people charged last Tuesday with one count of transmitting obscene materials by electronic means. The other two are: Abdillah Sabaruddin, 17, and Justin Lee Han Shi, 19.

The two teenagers were handed an additional charge each last Friday. They are now also accused of having obscene materials on their electronic devices earlier this month.

In an earlier statement, police said that the four alleged offenders were caught for their "suspected involvement in circulating obscene materials and promoting vice activities" through SG Nasi Lemak.

The police had received several reports against the chat group between March 15 and Oct 3 this year.

Officers from Ang Mo Kio Police Division managed to establish the identities of the four alleged offenders and arrested them at various locations islandwide earlier this month.

More than 10 electronic devices, including a central processing unit, a laptop, a hard disk and several mobile phones, were seized as case exhibits.

The chat group was used as a platform for sharing obscene photos and videos of women in Singapore. The photos are said to include upskirt images.

Screenshots of the chat group suggest there were more than 44,000 members when it was still active.

According to Chinese evening daily Lianhe Wanbao, the chat group was set up more than a year ago, but its membership numbers spiked in recent months with more people becoming aware of it. They had to pay $30 as an "entry fee".

Liong and Teo were not offered bail on Tuesday. Liong will be remanded at Woodlands Police Division and his case has been adjourned to Oct 29.

Teo will be remanded at the Institute of Mental Health for a psychiatric observation and will be back in court on Nov 5.

Offenders convicted of transmitting obscene materials by electronic means can be jailed for up to three months and fined.