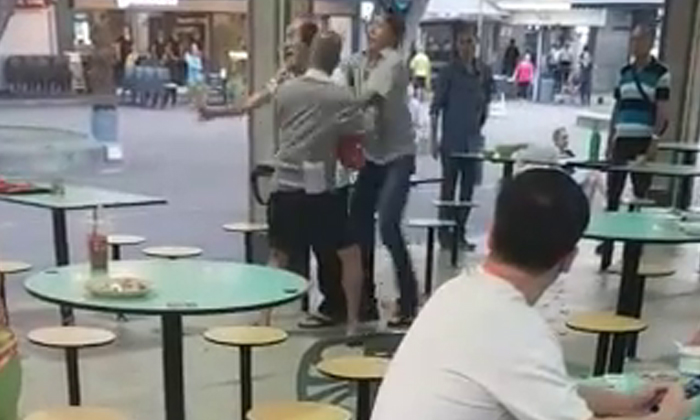 Two men involved in a fight at Toa Payoh Hawker Centre on July 26 were arrested for affray on Wednesday (Aug 1).

A video of the incident, which occurred at Block 210 Toa Payoh Lorong 8, went viral after being posted on Facebook, where it has garnered over 2,000 shares.

In a news release on Aug 3, the police said they have arrested two men, aged 61 and 64, for their suspected involvement in a case of affray at the hawker centre.

"On 26 July 2018 at about 6.40pm, the police received a report of a fight between two men at the hawker centre located along Lorong 8 Toa Payoh," added the police.

"When the police arrived, the two men had already left the location."

Through ground enquiries, officers from Tanglin Police Division established the two men's identities and arrested them on Aug 1.

If found guilty of affray, the suspects are liable to a jail term of up to one year and or a fine of up to $5,000.

Related Stories
Uncles in 'beer bottle fight' at Toa Payoh hawker centre, police appealing for info
Guy shouts at and shoves uncle who tries to break up his argument with another man
2 men arrested for fighting at Aljunied MRT Station -- over toilet urinal
More About:
fight
dispute
coffee shop
arrest