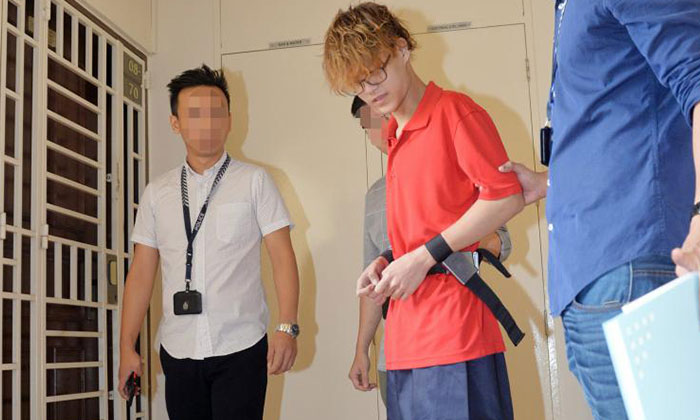 A 16-year-old who was arrested for loanshark harassment visited one of the scenes of his alleged crimes at Block 75B Redhill Close today (Aug 30) at 10.15am.

Stomp understands that he allegedly set fire to a unit in the block.

Joven Bey Ding Hui was arrested on Aug 25 at Geylang after extensive investigations by officers from the Criminal Investigation Department (CID) and Bedok Police Division.

Officers escorted Joven to a unit on the eighth floor, where they questioned him for about 10 minutes, before bringing back to the patrol vehicle.

Preliminary investigations show that the suspect is allegedly responsible for several cases of loanshark harassment involving fire, splashing of paint as well as padlocking gates to debtors' units island wide.

Three of the cases were reported on Aug 22 and 23.

He will be charged in court on Aug 26 with loanshark harassment.

Under the Moneylenders Act, first-time offenders found guilty of acting on behalf of an unlicensed moneylender, committing or attempting to commit any acts of harassment shall be punished with a jail term not exceeding five years, a fine of not less than $5,000 and not more than $50,000, and shall also be liable to caning of not less than three and not more than six strokes.