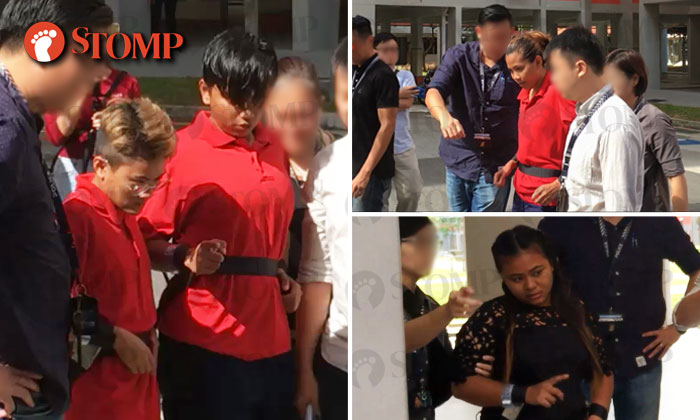 Four suspected female loanshark-runners who are accused of vandalising a car at Block 228 Simei Street 4 were brought back to the scene of the alleged crime by police for investigations today (Jun 20).

In an earlier Stomp article, it was reported that the women had spray-painted a car at the above-mentioned address and another in Hougang on Jun 13 and 14, as a warning for its drivers.

The women, aged between 21 and 24, were subsequently arrested and charged in court on Jun 17 under the Moneylenders Act 2010.

Earlier today, they were brought back to the crime scene in Simei.

At around 10am, they arrived at a carpark behind Block 228 in a police van.

Two women were first escorted out of the vehicle by a team of six officers. The duo were then led to a parking lot, and started explaining to the policemen what transpired on the day of the alleged crime.

Around 3 minutes later, they were escorted back to the van.

Thereafter, the third suspect was brought to a void deck and began answering questions by the officers.

The fourth subsequently was accompanied by male and female policemen to the front of the same parking lot her counterparts were at earlier.

There, she told officers her account of what happened, and was brought back to join the other suspects in the police van.

The entire scene visit by the suspects and police took around 10 minutes.

Said the police Public Affairs Department in a statement:

"Those who deliberately vandalise properties will be arrested swiftly and dealt with severely in accordance with the law.

"Upon conviction, these perpetrators can expect to be caned and jailed for damaging property and causing alarm to the general community.

"No effort will be spared to nab them to face the full consequences of their misdeeds regardless of their age."