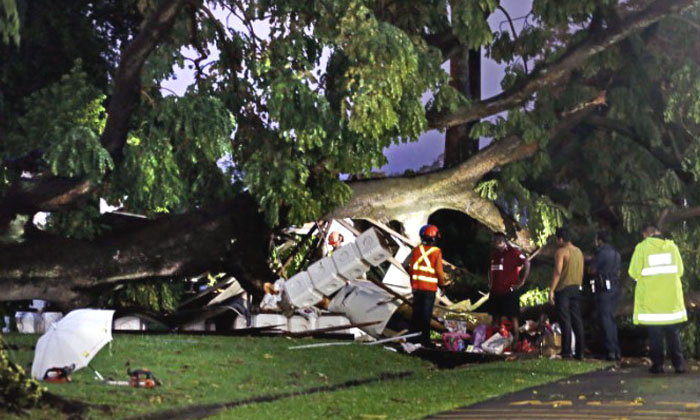 A group of 17 people, including SMRT employees, had gathered at Sembawang Park for a festive picnic, when a large tree fell on the shelter of a pavilion they were in yesterday (Dec 20).

The Singapore Civil Defence Force (SCDF) was alerted to the incident along Beaulieu Road at about 5.55pm.

According to The Straits Times, when the 21m-tall tree fell, the group had to help each other out of the rubble and suffered from cuts, bruises and a deep sense of shock.

Ms Carine Yeo, 44, a supervisor in the transport industry, said: "My friends were trapped under a log and roof. We tried to lift planks and pull them out. All had cuts and were bleeding. I am still in a bit of a shock from what happened." 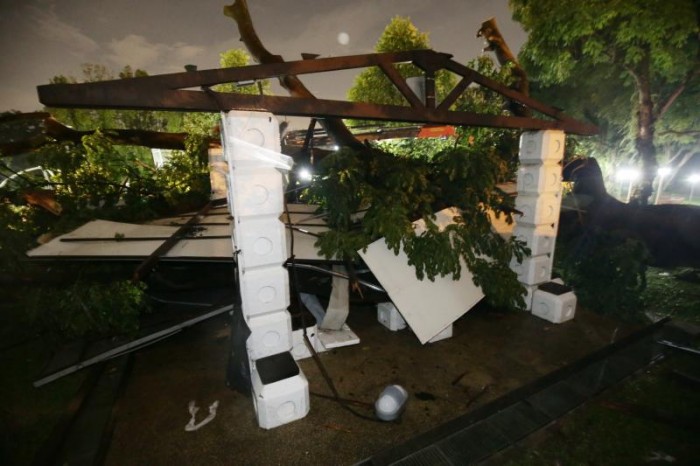 The victims who were injured were reportedly pulled out by those who were not and moved to a shelter nearby.

When SCDF officers arrived at the scene, no one was trapped in the crushed shelter and 14 people of the 17 were taken to Khoo Teck Puat Hospital.

Ms Chandra Das, 28, an SMRT route controller, looked visibly shaken as she said: "Everything happened in a second."

Ms Das had escaped relatively unscathed, but her husband Navin Sangar, 25, and also an SMRT route controller, required stitches on his forehead.

She added: "When the tree fell, there were sharp edges poking in. Those who could slowly crawled out from underneath."

Mr Chan, who is a bus conductor with SMRT, was at Sembawang Park after his supervisor invited him and his colleagues to celebrate Christmas, explained Mr Wong.

He said: "They were carrying out their activities when the tree suddenly fell on the pavilion and crushed them all ."

He was alerted to the incident after one of Mr Chan's colleagues called him.

The National Parks Board noted that there were intense thunderstorms with gusty winds in the northern part of the island. It said it is investigating why two trees, including the one which fell on the shelter, were uprooted at the park around 5.30pm.

The tree that fell was an Erythrophleum suaveolens, commonly known as ordeal tree, which was around 21m tall and 3.1m in girth.

The other tree that was uprooted was a Tabeuia rosea, also known as trumpet tree, measuring about 18m in height and 3.6m in girth.

The shelter, which the former fell on, was located near a playground in the park.

The Straits Times reported that when they arrived at the scene of the incident, a pathway leading to the shelter was blocked by the fallen tree.

There were more than 10 workers who were in the process of cutting it to pieces.

In the crushed shelter, there were wet clothes left on the seat, along with bottles of water, packets of chips, a smudged cake and unwrapped presents.

At the KTPH, the transport operator's chief executive Neo Kian Hong was seen visiting and speaking to those injured yesterday night at about 10pm.

He said: "We're just very concerned about our staff.

"We will definitely be there to make sure that we can support them." 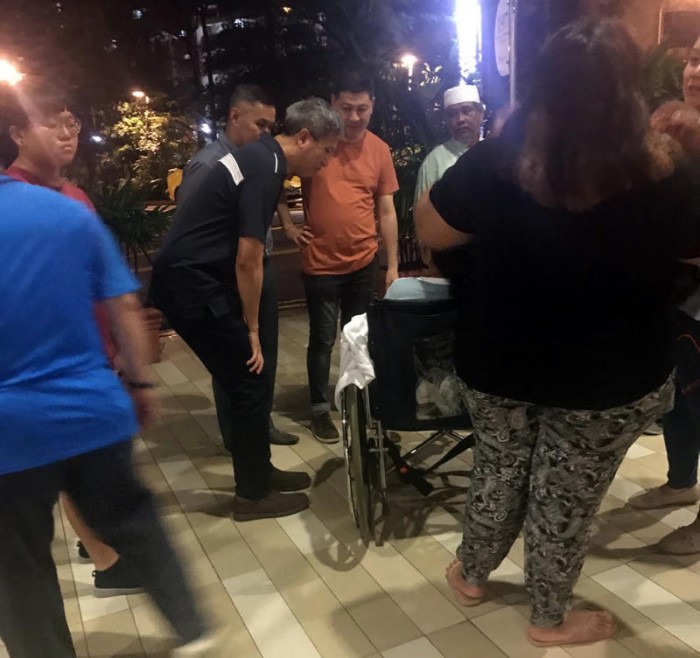 In January, extreme weather conditions with intense rain and strong winds were reported in the north and north-eastern parts of Singapore, which led to flash floods and more than 200 reports of falling trees.

One of the areas affected by winds of more than 70kmh and heavy rain was Sembawang.

In Yishun Park, during that period, several trees were completely uprooted and obstructed pathways.

NParks' streetscape group director Oh Cheow Sheng told ST in January: "To prepare for such weather events, NParks has strengthened our management of trees by replacing storm-vulnerable trees and carrying out targeted pruning and crown reduction prior to the monsoon season."

According to ST, Mr Lim Hock Lye, the owner of Beaulieu House restaurant, which is located in the park, next to the sea, said that the area around the fallen tree was barricaded when he arrived at his restaurant at around 6.30pm.

According to the 64-year-old, there was a terrible thunderstorm that started at about 5pm, but the rain had eased by 6.30pm.

He added that on Sunday (Dec 16) a tree in the park had been struck by lightning.

However, he is unsure if there were any injuries.