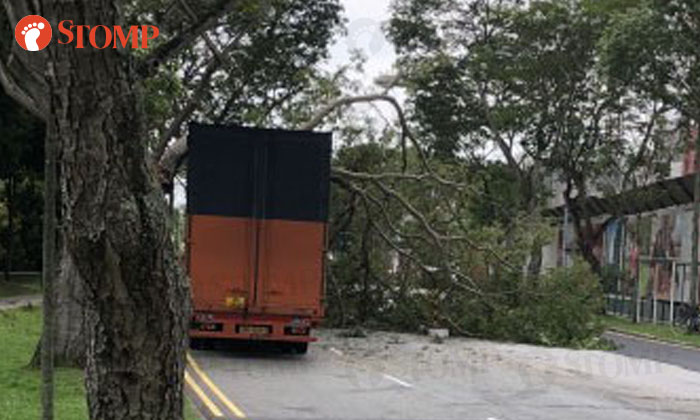 A tree branch fell across the road at a junction along Clementi Avenue 1 yesterday (Dec 5).

Stomper Ray, a resident of Clementi, was walking on the kerb to the bus stop at about 2.30pm and saw a large lorry passing him.

He took no notice of the vehicle, until he heard a loud crash.

He said: "I was walking and suddenly there was a very loud bang, that sounded like thunder roaring.

"I paid more attention to what was ahead of me and saw that a large tree branch had fallen across the road."

The Stomper quickly snapped pictures of the tree and the lorry.

He told Stomp: "I took pictures of it from where I was standing, then went to have a closer look and took even more pictures."

Stomp understands that the tree branch was weakened after having been struck by lightning.

The lorry then hit the branch while driving by, which caused the branch to collapse.

The truck was not damaged and the tree branch has since been cleared away.

Ray added: "I have never seen any part of a tree fall before and I don't know of any case of falling tree branches in this neighbourhood, so I was quite shaken up by the incident."