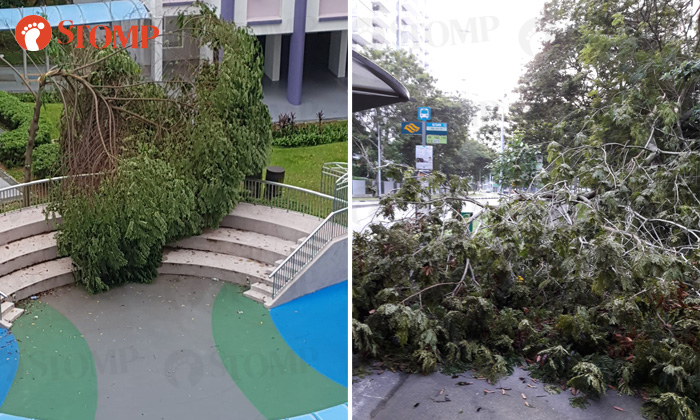 Two Stompers had alerted Stomp to fallen trees at around different areas of Sengkang.

Both incidents happened on Jul 8.

Stomper Mukund, a resident of Rivervale Drive, said: "I think it happened in the wee hours.

"I looked out of my window and saw the fallen tree.

"There was a heavy rain the previous night so I guess that's why the tree fell.

"I think no one was injured."

Mukund added the tree was already cleared at about 2pm yesterday.

Stomper Seetoh was at the bus stop of Block 204 Compassvale when she came across the fallen tree at around 7am.

She said: "I was waiting for a bus and I saw it.

"I think it was probably because of the rain and strong winds."

In response to a Stomp query, Pasir Ris-Punggol Town Council said: "Our trees are pruned every six months and our inspections revealed that both trees were last pruned a month ago.

"The cause of both incidents could be attributed to the recent period of strong microbursts and wet weather conditions.

"In view of public safety, our horticulture team will take further preventive measures by stepping up their inspections and arrange to remove trees that may be at the risk of falling."