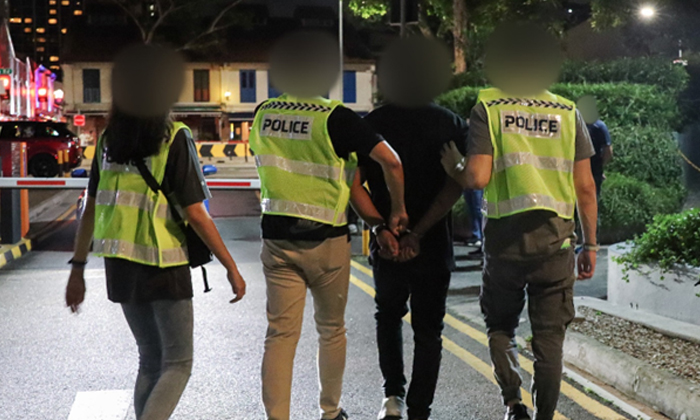 Five men, aged between 20 and 33, for various offences during an enforcement operation against public entertainment outlets on Sept 17.

A total of 134 individuals were also checked in the joint operation by the Central Police Division, the Criminal Investigation Department and the Central Narcotics Bureau.

Police said in a news release on Saturday (Sept 24) that five men were arrested for the following offences:

Police investigations against the five individuals and the operators of the seven public entertainment outlets are ongoing.

Anyone found guilty of being a member of an unlawful society faces a jail term of up to three years and/or a fine of up to $5,000.

The offence of possession of an offensive weapon in a public place carries a jail term of up to three years and at least six strokes of the cane.

Under the Employment of Foreign Manpower Act 1990, the offence of being in employment without a valid work pass carries a jail term of up to two years and/or a fine of up to $20,000.

The police said they will not hesitate to take action against errant operators or members of the public who commit crime in public entertainment outlets.

They added: "The police will continue to carry out regular enforcement checks on public entertainment and nightlife establishments to suppress illicit activities, suppress criminal and secret society activities.