12 hurt after accident between lorry and bus on PIE 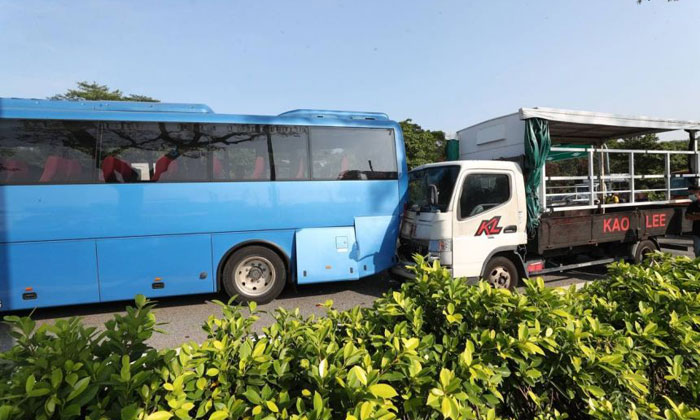 An accident involving a lorry and a bus on the Pan Island Expressway (PIE) on Thursday morning (Feb 25) left 12 people injured and caused a major jam during the morning peak hour.

A Singapore Civil Defence Force (SCDF) spokesman told The Straits Times they received a call for assistance about the accident along the PIE towards Tuas at the Jalan Bahar exit at about 8am.

A police spokesman said the 75-year-old male lorry driver and his 11 passengers, aged between 22 and 39, were conscious when taken to the hospital. Police investigations are ongoing.

The Land Transport Authority had warned motorists in a tweet about road congestion up to the Kranji Expressway.

At the hospital, a worker who was in the lorry told ST he and his colleagues tumbled over one another after the collision.

He said they sustained minor cuts and scratches, and some had bruises and aches.

About nine workers were at the hospital's emergency ward, and all were mobile. One was in an arm sling.

A staff from Kao Lee was checking on the workers' condition and later took those who had been discharged away. She declined to comment on the accident.

The bus driver had told ST earlier his vehicle was carrying about 20 passengers, while the lorry was ferrying workers.

He said none of his passengers was hurt.