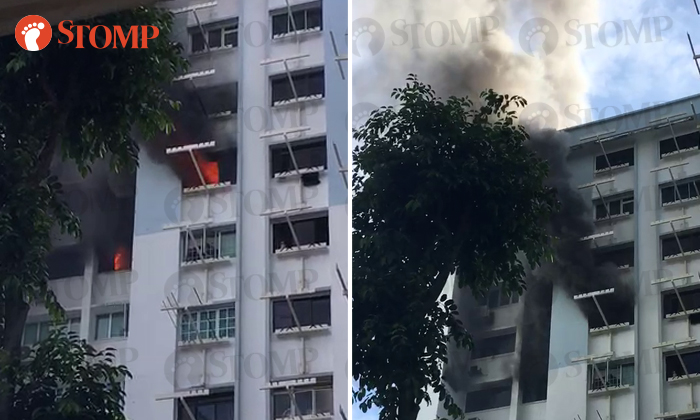 One person suffered smoke inhalation after a fire broke out in a ninth-storey unit at Block 221 Yishun Street 21 on Thursday morning (Feb 14).

In response to a Stomp query, the Singapore Civil Defence Force (SCDF) said it responded to the incident at around 9.15am.

The fire, which involved the contents of the unit's kitchen and living room, was extinguished by the SCDF using two compressed air foam backpacks and one water jet.

"One occupant of the unit was conveyed to Singapore General Hospital for smoke inhalation," an SCDF spokesman added.

There were no other reported injuries as a result of the fire.

Stomper Jason and girlfriend, who are residents at the block, contributed videos of the blaze and thick smoke emitting from the unit.

Jason told Stomp: "The police were asking people to clear the area.

"There was an overwhelming smell of burnt plastic despite our distance from the unit.

"I think the fire spread to the eighth floor too as you can see in the video."

Stomper Michael Francis, who stays in the vicinity, also saw smoke from a distance.

Check out a video taken by Stomper Kurade's wife below.