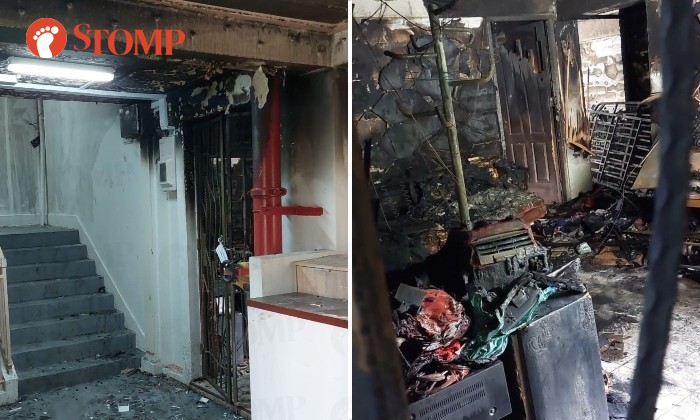 About 50 people were evacuated after a fire broke out at Block 222 Lorong 8 Toa Payoh and one person was taken to the hospital for smoke inhalation on Friday (Aug 12).

Sharing photos and a video of the fire's aftermath, Stomper Wei Sien said he has lived in the block for 28 years.

He told Stomp: "One of the level-three units was on fire and the cleaners cleared the corridor from level three to level five. I was at the scene and saw them clean the black stains."

In a Facebook post, the Singapore Civil Defence Force (SCDF) said that it was alerted to the fire at 8.20pm.

"Upon SCDF’s arrival, the fire was raging and thick black smoke was emitting from a unit on the third floor. At the height of the firefighting operation, two water jets were deployed to fight the fire. As a result of the fire, the entire unit was affected by heat and smoke damage," said SCDF.