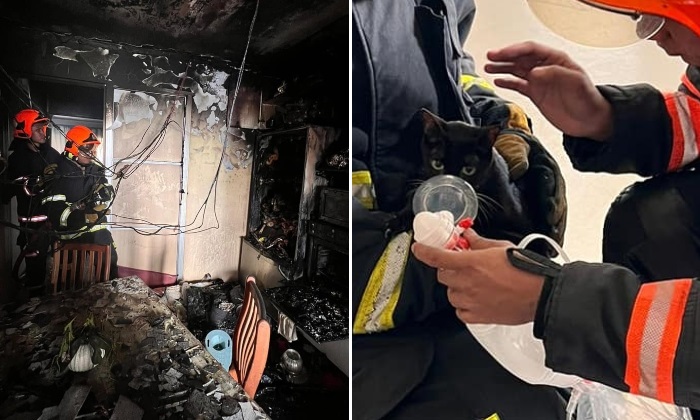 Mr Amirul Haidy Azlee, 26, woke up to the smell of something burning on Monday morning (June 13) and saw white fumes coming out of the oven in his kitchen.

The mechanical technician said he quickly switched off the device, opened it to let out the smoke and checked to see anything was on fire.

"Everything looked okay so I went to take a shower. But soon after, I saw black smoke seeping into the toilet," said Mr Amirul, who lives in a fifth-storey unit in Block 310 at Jurong East Street 32.

"I ran into the kitchen and saw the oven was on fire and the flames had spread to the table."

He tried to put out the fire but the smoke was too dense.

Mr Amirul then helped his mother, 52, and his 7-month-old son out of the burning unit and told his neighbours to evacuate.

"This was the scariest thing I've ever experienced... It was even more frightening than being in a motorcycle accident because my family is involved," he said.

He lives in the four-room flat with his parents who are in their 50s, wife, 25, and son. His dad and wife were at work when the fire broke out.

Firefighters put out the blaze and rescued two cats that were in the home.

Mr Amirul's infant was taken to National University Hospital as a precautionary measure. He has been discharged.

About 15 people were evacuated from neighbouring units by the police.

In a Facebook post, the Singapore Civil Defence Force said it was alerted to the fire at 7.50am.

"Firefighters from Jurong Fire Station extinguished the fire using a water jet and a compressed air foam backpack," it said.

The cause of the fire, which was confined to the kitchen area, is under investigation.

The two cats rescued were given oxygen by firefighters who were trained as emergency medical technicians.

Mr Amirul said his third cat was hiding in a wardrobe and was later found safe.

"I wanted to save my cats but I didn't know where they were when the fire broke out. I could only ask the firefighters to help save them," he added.

Mr Amirul said his neighbour of 27 years had attempted to put out the fire using a fire extinguisher before the firefighters arrived.

"I'm very thankful that we have neighbours that help one another in times of need," he added.

SCDF said it will be reaching out to the individual "to commend him for his quick thinking and prompt action in attempting to put out the fire".

Another neighbour on the fifth storey who wanted to be known only as Ms Ong had offered to house the family while their flat is being cleaned up.

"It's the least we can do to help them," she said.

Mr Amirul said he appreciates the offer, but the family will be living with their relatives for the time being.