Housewife, 73, rushed to save blind husband from Telok Blangah fire 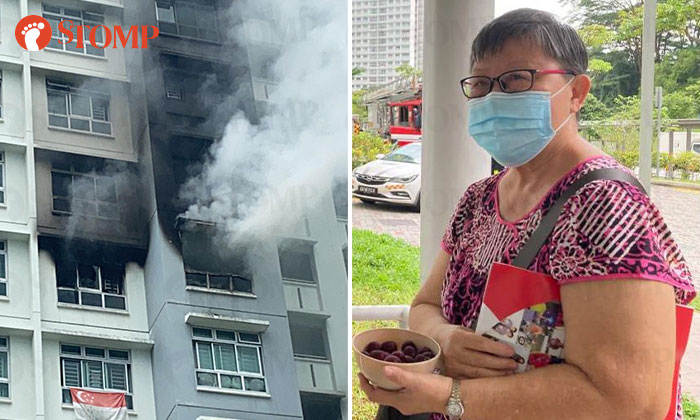 As some 50 residents rushed to evacuate from a Housing Board block in Telok Blangah after a fire broke out in one of the flats on Wednesday (Aug 3), Madam Doreen Ong, 73, headed towards the lift instead to save her husband who is blind.

The housewife was returning from marketing just before noon when she saw a crowd gathered across the block pointing at a flat on the 11th floor that was ablaze.

Madam Ong said: "I had just returned from the Telok Blangah market when I saw these fire engines at the block. All the neighbours at the coffee shop were standing outside and pointing up at the fire.

"My husband, who can't see, was still at home. The floor was wet after the rain but I quickly ran home so I could get him down (to safety)."

She rushed up to her studio apartment on the 19th floor to look for her 73-year-old husband, who was oblivious to the danger as he thought the stench in the air was due to the burning of joss paper during the Hungry Ghost Festival.

The couple grabbed their identity cards, marriage certificate and some spare cash and managed to make their way down the block safely.

No one was injured and the cause of the fire is under investigation.

The Singapore Civil Defence Force (SCDF) said on Wednesday that it was alerted at 11.40am to the fire at Block 92B Telok Blangah Street 31.

Upon arrival, its officers observed that thick black smoke was billowing out from a 11th-floor flat.

Firefighters from the Alexandra Fire Station forced their way into the flat and extinguished the raging flames inside using two water jets, said SCDF.

It added: "About 50 occupants from the affected block were evacuated as a precautionary measure."

One person was assessed by a paramedic to have inhaled smoke but refused to be taken to hospital, the SCDF said. 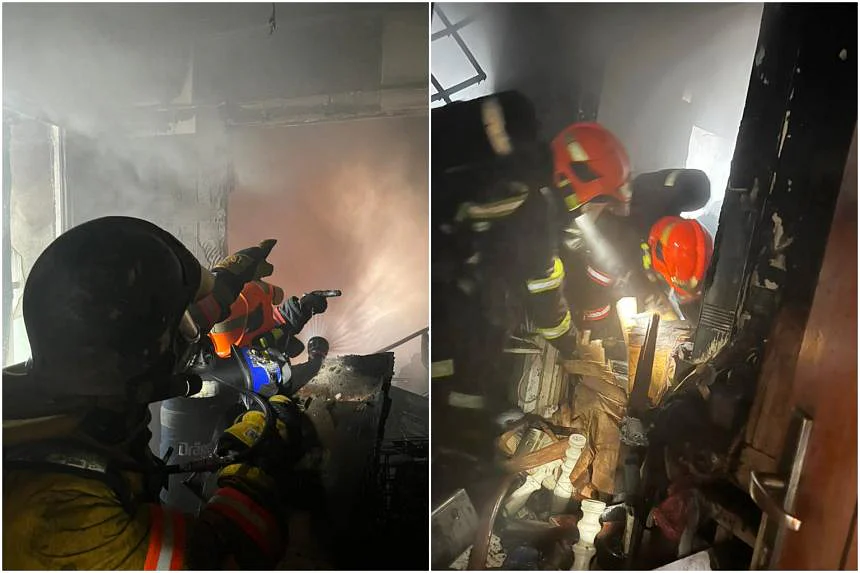 In a Facebook post, West Coast GRC MP Rachel Ong said that she learnt of the fire from residents slightly before noon.

The affected block has 30 floors and contains a mix of studio apartments usually occupied by seniors, as well as larger flats.

After the fire, members of the West Coast Town Council were on-site to give out water to the residents who had evacuated, said Ms Ong.

When The Straits Times arrived at the scene at 3pm, most of the residents - except for those living on the affected floor - had returned to their homes.

Ms Ong has since visited the block and met some of the residents, including the owner of the affected flat, who she said was physically unharmed.

When approached by ST on Wednesday, the owner, a man believed to be in his 60s and living alone, declined to comment. It is not known if he was home when the fire broke out.

Mr Ter Keng Piew, 67, who lives in the flat opposite, said that his wife, 66, had heard an explosion earlier in the morning and smelled something burning.

He said that his neighbour worked as a karung guni man (scrap dealer) and the studio apartment he occupied had various items such as old television sets and cabinets. The common corridor was lined with stacks of newspapers and assorted furniture, said Mr Ter, a retired butcher.

Four hours after the fire, workers from the West Coast Town Council were seen disposing items belonging to the affected flat.

Mr Ter said: "I don't know how the fire happened but I am glad it took place in the day when most people are not at home. If it is at night and people are sleeping, someone could have died."