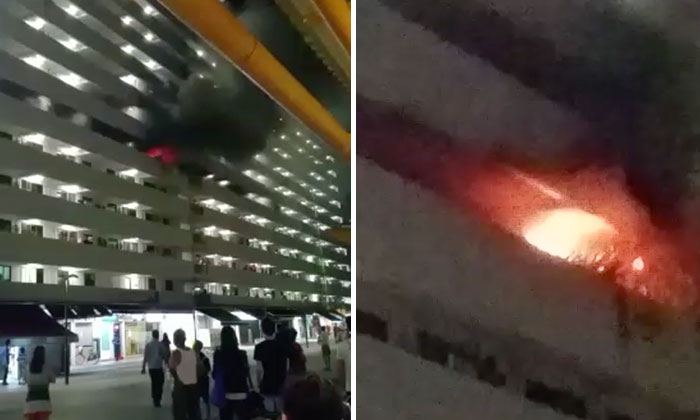 Stomper NoorWhirlzWindz and David alerted Stomp to a video of the roaring flames and billowing smoke from the affected unit which has been circulating on social media.

In the video, a crowd can be seen gathering at the foot of Block 18 as the fire engulfed the sixth-floor unit.

SCDF told Stomp that it received an alert to a fire in a unit at 8.22pm, and dispatched one fire engine, two Red Rhinos, one ambulance, and two support vehicles to the scene.

A forcible entry was conducted and a body was "found lying motionless and pronounced dead inside the unit” by paramedics.

The fire which involved the contents of a unit was extinguished by the SCDF using two water jets.

About 50 residents were evacuated by the police during the operation.

A next door neighbour of the victim, 56-year-old Madam Chia told The Straits Times that she had detected the smoke earlier on but thought that the smell was prayer incense at first.

However, the smell grew stronger, and she, along with other neighbours went onto the corridor to see what was happening.

Said Madam Chia: "I did not realise how bad the fire was until I was on the ground floor. It was terrible, there was a lot of smoke coming out.”

Another neighbour, software engineer Quek Wee Siang, 31, said that he and his father went to investigate the affected unit when they smelt smoke.

When the two arrived, they saw that the altar in the house was on fire.

They tried calling out to the occupants of the flat but there was no response.

The cause of the fire is under investigation, and there were no other reported injuries aside from the victim.

The police are investigating the unnatural death.