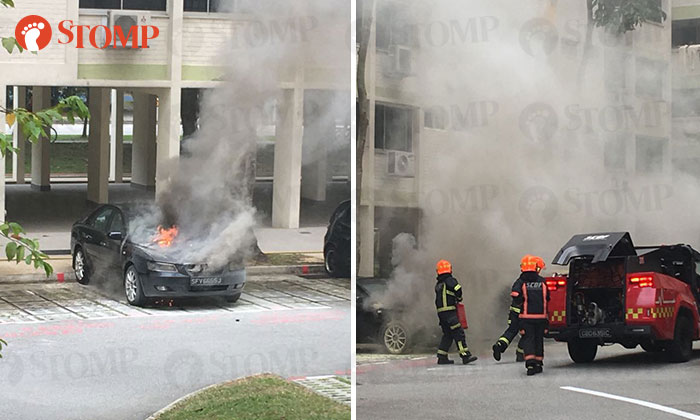 A black Mitsubishi SFV6655J caught fire at the carpark in front of Block 851 Yishun Street 81 later Friday afternoon (April 6) at around 4.45pm.

Stomper Lynn who lives in a block nearby witnessed the scene and took photos and a video which she sent to Stomp.

She had noticed the billowing smoke from the burning vehicle and informed her husband and son about the fire.

In the video which Lynn took, the bonnet of the car is observed to be burning.

According to Lynn, a taxi driver had attempted to use a fire extinguisher to put out the flames, but Lynn’s husband shouted at him, saying it could worsen the situation.

He asked the cabby to call the Singapore Civil Defence Force (SCDF) instead.

"They wanted to move their vehicles away because they were afraid that the Mitsubishi might blow up and affect the other vehicles as well.

"My neighbour then called the SCDF, and they arrived quickly.

"I was worried because there is a childcare centre nearby, and the smoke could have been inhaled by the children there.

"Luckily, no one was around."

Officers from the SCDF arrived at the scene and extinguished the fire in less than five minutes.

In response to a Stomp query, an SCDF spokesman said: "SCDF was alerted at about 4.45pm to a vehicle fire.

"The fire was extinguished by SCDF using 1 waterjet and 1 compressed airform backpack.

"There were no injuries reported."

The SCDF would also like to share tips on preventing and handling a case of a vehicle fire.

(1)   Primary Cause of Vehicle Fire

Most vehicle fires in Singapore occurred while the vehicles were travelling on the road.  The primary cause of these fires is due to ignition sources such as overheating and electrical faults within the engine compartment.

(2)   Equip your vehicle with a fire extinguisher

Most vehicle fires start small but develop rapidly due to the presence of flammables such as petrol, diesel and lubricants.  Hence it is advisable for every vehicle to be equipped with a fire extinguisher so as to enable the driver to extinguish an incipient fire before it spreads.

For a step-by-step guide on how to operate a fire extinguisher, please visit the SCDF website link at:

or download the SCDF application from the Apple and Android App store.

(3)   Measures to minimise injury during a vehicle fire

While travelling, if a vehicle owner were to spot any sign of smoke emitting from his/her vehicle:

If you detect a fire and have a fire extinguisher with you, extinguish the fire and/or call 995 for the SCDF.

To prevent your vehicle from catching fire, you are reminded to:-

·         During each servicing session, ensure that the vehicle’s electrical, engine and fuel systems are checked for any defect.

·         Outside of scheduled servicing period, owners are encouraged to conduct visual checks for any sign of oil leakage.