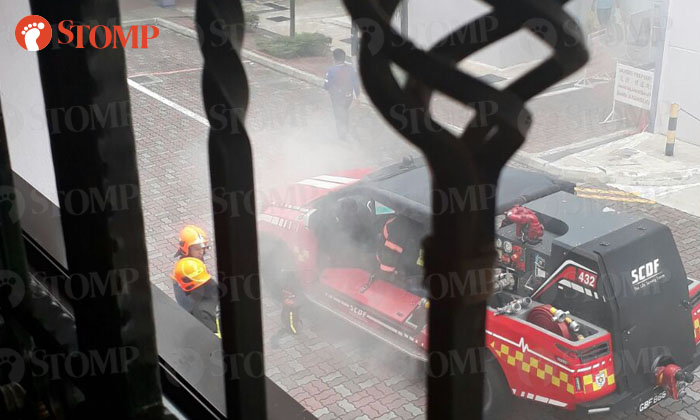 A 69-year-old man was arrested after garbage bins caught fire at Block 668 Woodlands Ring Road on Tuesday (Apr 24), at around 5pm.

Stomper Jonathan shared photos with Stomp showing smoke coming from below the block.

A Singapore Civil Defence Force (SCDF) vehicle and a police vehicle were at the scene.

"I heard someone saying someone threw something inside the garbage bin that caused the fire."

A police spokesman told Stomp that it was alerted to a case of a rubbish bin on fire at 5.09pm.

Through ground enquiries and the help of footages from police cameras, the suspect was identified and arrested within an hour.

"A 69-year-old man was arrested for his suspected involvement in a case of mischief by fire," the police spokesman said.

A lighter was seized from him as a case exhibit.

Under Section 435 of the Penal Code, Chapter 224, anyone convicted for the offence of mischief by fire with intent to cause damage to property is liable for a fine, and a jail term not exceeding seven years.